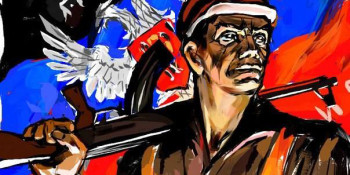 Convicted embezzler and former Prime Minister Yulia Tymoshenko was on a tour of east Ukraine this Easter weekend talking about finding «compromise» and «national unity». She said she wanted to hear the grievances of the people in cities like Donetz, Kharkov and Slavyansk, where anti-Kiev protesters continue to occupy public buildings despite the Geneva agreement worked out this week on de-escalating tensions across the country.

This conciliatory tone, expressed to media in Donetz by Tymoshenko, sounded like a miraculous conversion – Alle-Yulia! – appropriate for the Christian celebration of Christ’s resurrection from the dead. Perhaps the lady’s plaited hairstyle is supposed to now signify a virtuous halo.

Only a few weeks ago, Tymoshenko was caught saying in a private phone call how she wanted to turn pro-Russia eastern Ukraine into ash from a nuclear attack. In the same leaked phone call – which Tymoshenko confirmed as authentic – the disgraced politician also called for ethnic Russians opposed to the Kiev junta to be «whacked in the head» by death squads…

Such criminal incitement is now expected to be forgotten, it seems, as Tymoshenko posed as a voice of reason on her «tour» of the east. It is doubtful that she actually did take soundings from protesters over the weekend – so deep is the contempt felt for her – and she probably confined herself to briefings from the various oligarch figures that the Kiev junta has newly imposed as political governors for the region.

The conversion from death-wish embezzler to matriarch of the nation was the second such miracle involving Tymoshenko. While in prison before being released by the Kiev junta that seized power at the end of February, Tymoshenko claimed that she was confined to a wheelchair allegedly because of her deteriorating health. Now, released from prison, the lady appears to have made a full recovery, walking on to public platforms to sing the praises of the coup-appointed Prime Minister Arseniy Yatsenyuk, who is also a leading figure of her neo-fascist Fatherland Party.

For years during her incarceration, Tymoshenko sent out distraught appeals to her backers in Western governments and the media claiming mistreatment by the former Ukrainian authorities. Her forlorn appeals were made from a prison wheelchair, which she said was necessary because of paralysis brought on by her cruel imprisonment. Never mind that her seven-year jail sentence was a result of a court prosecution, which found her guilty on counts of massive corruption involving state gas supplies and millions of dollars.

Her conviction was quashed by the Western-backed regime that seized power in Kiev on February 22. Pro-Western, pro-IMF looting of the economy, and pro-NATO, Tymoshenko came to fame during the CIA-backed Orange Revolution of 2004. She is now planning to run for the Ukraine presidency in elections scheduled for next month. Perhaps her presidential ambitions are having a cathartic effect, not only enabling her to ditch the wheelchair and stride forth, but also to abandon harboring odious ideas for mass murder.

And now – alleluia! – Tymoshenko is extending the hand of mediation to people whom she wanted to drop nuclear weapons on only a few weeks.

It may be Easter, but the protesters occupying buildings in eastern Ukraine are right to not buy this particular miraculous conversion. Nor should they vacate the buildings they began occupying earlier this month, or to disarm. …more

A terrible year for Rihanna al Mousawi who was arrested in April 2013 for “planning to bomb” the FI Race. Public Security Chief General Tariq Hassan accused her and Nafeesa al Asfoor of attempting “ a dry run to test the security measures at the F.I. by carrying in a cushion. She was tortured and her 16 year old son Husein was threatened with torture. She was taught a “fabricated tale” several times and beaten on her head if she made a mistake.

She was threatened with rape if she changed her story and forced to stand naked in a doorway. She was interrogated for 3 hours by the Attorney Genera Fahed Albuainain. Seven hooded men showed her photos of Naji al Fateel, Hadi Al Moussawi and Hisham al Sabbagh, demanding if she knew them. She was accused of going to the Lebanon to receive training in weapons. Rihanna thought she’d be accused of campaigning for detainees at the FI protest but finds herself accused of membership of the “14th February Coalition” and plotting to bomb the F.I.

At the first court session she bravely spoke about her torture but Judge Ali Al Deraini laughed and dismissed it. He allowed the prosecution to make their case, but not the defence or defendants. The defence lawyers petitioned to have the Judge removed for bias, but failed. Rihanna was sentenced to 5 years in the 14th February Coalition case. The defence lawyers demanded the investigation of Rihanna’s torture claim at 16th April session, The Judge refused. She’ll be sentenced on 29th April 2014 on the “bomb” charge and get the result of the 14th February Coalition Appeal.

Three other prisoners will be sentenced on 29th April:

The Bahraini people need international pressure, economic boycotts and a cut in transport links. The Khalifa regime will only stop killing and detaining its citizens if there is a price. Obama and Cameron will do nothing because of arms sales and Saudi Arabia. Please tell me what you can do to help Rihanna, Hussain, Jassim and Ahmed.