Americans can help give world peace a chance 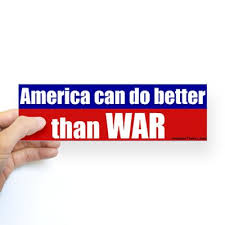 A first step for world peace is for the American people to rein in their reckless government from the international stage and to stop it making misery for so many.

This may come as a shock to many ordinary Americans who tend to think that their country is already the beacon of democratic light unto the world, bestowing all sorts of benevolence to others. Such delusional “American exceptionalism” has to stop. America is only special in a very negative meaning. It plays a central part in fomenting conflict in almost every scenario we care to look at.

We see this nefarious US role in the never-ending Israeli-Palestinian travesty known as a “peace process”. In reality, this process is but a continual green light for the Israeli regime to commit massive violation of international laws against the long-suffering Palestinian people.

US Secretary of State John Kerry this week rushed off to the Israeli regime allegedly to urge its Prime Minister Benjamin Netanyahu to engage with Palestinians. To many ordinary Americans, as told by their news media, Washington is acting as a hapless peace broker between two implacable opponents. Wrong.

The US is indulging, as it always has, a systematically criminal Israeli regime, which continues to build illegal settlements in contravention of Geneva and Nuremberg principles, and which is reneging on past commitments to unconditionally release thousands of Palestinian prisoners as part of the Oslo Accord signed more than 20 years ago.

Washington does nothing, nothing, to stop this Israeli affront to humanity. In fact, the US is fully complicit with these crimes against humanity by bankrolling the Israeli regime to the tune of $3 billion every year.

This fawning by Washington is underscored also this week by US army chief Martin Dempsey who was visiting his Israeli counterpart Benny Gantz. Photographs of the smiling military bosses, days after Israel killed civilians in air strikes on Gaza, speaks of the real relationship, and it shows unequivocally which side Washington is on with regard to this decades-old mass suffering. There will never be peace in Palestine – because of Washington.

Meanwhile, we also see the inimical role of the US in a new flare up of conflict between North and South Korea. The two countries have this week exchanged live fire across their maritime border, accompanied by warnings of an all-out war. Again, the US poses here as some kind of “honest broker” of peace between two belligerent parties. …more

US War Uncategorized No Comments »