Bahrain: Abducted, Beaten and Threatened by Police with Impunity 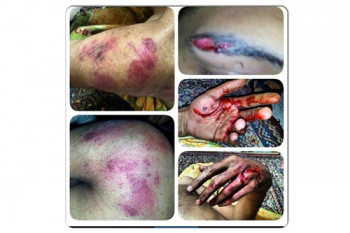 The Bahrain Center for Human Rights expresses concern about the continuation of grave violations including abduction of civilians, severe beatings and leaving them in a stranded area. These actions appear to come as a form of punishment and threat for those who participate in pro-democracy protests in the country. The BCHR has document numerous such cases in different areas that witness daily protests demanding the right to self-determination.

A civilian, who asked to remain unnamed for safety reasons, told the BCHR that he was abducted by security forces on the 17th of January 2014. He was reportedly severely beaten with different weapons and blunt objects. He added that he was verbally abused, and the security forces used very derogatory sectarian terms during the beating. The victim was then taken to Karraneh beach, where he thought he would be dumped, but the security forces continued to beat him until he lost consciousness after which they left. A number of Karraneh residents found him and moved him to a house where he was treated by a volunteer nurse as he feared anticipated arrest if he were to go to the hospital. …more