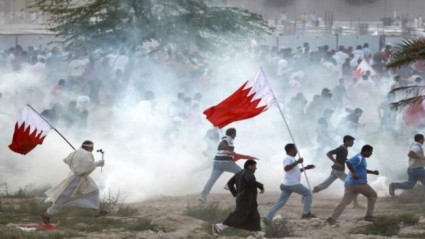 Another Bahraini has died due to inhaling tear gas fired by Saudi-backed regime forces as the ruling Al Khalifa dynasty continues its violent suppression of peaceful pro-democracy rallies in the country.

Locals said they had witnessed extensive use of tear gas and poisonous fumes when Bahraini forces sought to disperse protesters during an anti-regime demonstration in the Wadiyan area of the northeastern island of Sitra on Monday, al-Manar television network reported.

The victim, identified as Jawad al-Hawi, died due to asphyxia after inhaling poisonous tear gas fired by regime forces. His funeral is due to be held later on Tuesday.

Meanwhile, a Bahraini court handed jail terms of 5 to 15 years to eight anti-regime protesters on charges of possessing weapons and explosive devices in the eastern village of Tubli.

Bahraini uprising started in mid-February 2011. On March 13 that year, forces from Saudi Arabia and the United Arab Emirates were dispatched to the country at Manama’s request to quell nationwide protests.

Scores of Bahrainis have been killed and hundreds injured and jailed by regime forces since the uprising broke out.

On February 14, UN Secretary General Ban Ki-moon called on the Bahraini regime to respect its “international human rights obligations” in dealing with peaceful protests in the country. …source