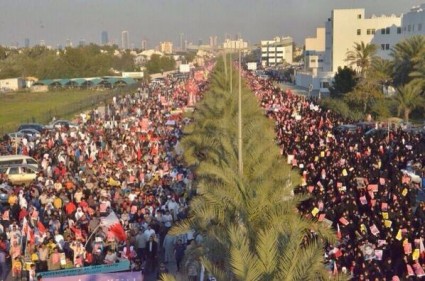 Thousands of Bahrainis, mainly from the Shia majority, demonstrated near Manama on Friday against what they described as sectarian discrimination in the Sunni-ruled kingdom.

“No to discrimination,” chanted protesters brandishing Bahrain’s red-and-white flag as they marched along Budaiya main road, which links Shia villages with the capital, witnesses said.

Some protesters later clashed with riot police, who replied with tear gas.

Ali Salman, the chief cleric of the main Shia formation Al-Wefaq, was among leaders of the opposition who participated, according to images the group posted online.

They carried posters of prominent opponents jailed over their roles in the short-lived uprising of February 2011, including the Sunni head of the secular Waed party, Ibrahim Sharif, who is serving a five-year sentence.

“Sectarian discrimination is eating into the body of Bahrain in a systematic way applied by authorities,” opposition groups said in a statement at the end of the demonstration, referring to the Al-Khalifa dynasty.

The protest was held on the occasion of the UN’s International Day for the Elimination of Racial Discrimination.