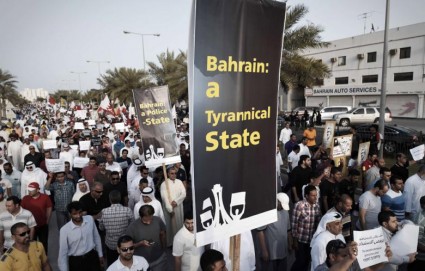 On Sunday night, Bahrain will celebrate its ten-year anniversary as a Formula One host country. The event has been touted as a moment of national pride and unity, but the glamor and rumbling motors of the race have become yet another sinister excuse to quash Bahraini dissent.

Under the slogan “UniF1ed,” Bahrain has turned the Grand Prix into a propaganda tool to burnish its image on the international stage as a peaceful modern country.

But this image is threatened by the reality of three years of state repression against dissent, which has killed close to 100 protesters and jailed hundreds of opposition members.

Formula One, one of the world’s most lucrative sports, has become a battleground between Bahraini activists seeking to raise international awareness of their plight and the government trying to silence them.

“Who benefits from the Formula One race? The ruling family,” Bahraini activist Nedal al-Salman told Al-Akhbar. “We want to show what is really happening.”

Since the cancellation of the Bahraini Grand Prix in 2011, in the early moments of the uprising, the monarchy has intensified its campaign to clamp down on protests every year ahead of the Formula One races, and 2014 seems to be no exception.

“Every year before the Formula One race, there is a huge crackdown on protesters, with arrests, collective punishment, house raids, injuries and even protesters being killed by the police,” Yousif al-al-Muhafda, head of the documentation unit of the Bahrain Center for Human Rights, said.

But this image is threatened by the reality of three years of state repression against dissent, which has killed close to 100 protesters and jailed hundreds of opposition members.
“They don’t allow protesters to go out in the streets so journalists can’t see them,” he added. “Some villages are even surrounded with barbed wire. The crackdown started in January this year, and we documented 500 people getting arrested since.”

Journalists have been barred from covering protests in the country in further efforts to strangle the opposition, said Salman, who is also involved with BCHR and helps journalists access opposition sources.

At least two journalists who cover Bahraini protests have been arrested in the past two months, the Committee to Protect Journalists said, who added that Bahrain has one of the highest number of incarcerated journalists per capita, second only to Eritrea. Three reporters have been killed since the beginning of the uprising, and numerous others have been injured or otherwise intimidated into silence.

“This year we’re a bit careful, because we are worried that we might be punished,” Salman said.