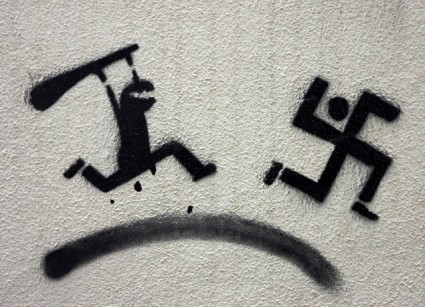 Between the Nuremberg Trials and the “Glorious” Egyptian Judiciary
by ESAM AL-AMIN – 25 March, 2014 – Counter Punch

The Nuremberg Trials (in Nuremberg, Germany)

Number of Victims Declared by the Prosecution at Trial: At least 40 million in Europe alone.

Number of People Accused: 23 (Over 200 Nazi leaders were later tried at Nuremberg.)

Number of Accused Condemned to Death: 12

The Minya Trials (in el-Minya, Egypt)

Charges: Storming a police station, killing a police officer, rioting, and mass protests in el-Minya (75 miles south of Cairo) in the aftermath of the massacres at Raba’a Al-Adawiyya Mosque and Al-Nahdha Square in Cairo on August 14, 2013, that killed over 1,000 protesters by the army and security officers.

Number of Victims Declared by the Prosecution at Trial: 1 (A police officer.)

Judges (3): Led by presiding judge Said Youssef Sabri. [Sabri is the same judge that acquitted all officials and police officers accused of killing about two-dozen protesters in the Bani Swaif region in Upper Egypt during the 18 revolutionary days after the January 25, 2011 mass protests.]

Number of Court Sessions: 2 (totaling 100 minutes)
[The first session on Mar. 22 lasted for 45 minutes where the indictment was officially presented. The second session was on Mar. 24, where the accused were sentenced. It lasted less than one hour.]

Number of the Accused Identified as Members of the MB: 122

Number of the Accused Not Identified as Members of the MB: 423

Number of Pages of Police Investigations turned over by the Prosecution to the Judge and Defense Teams on the first day of trial on Mar. 22: Over 14,000.

Number of Government Witnesses Heard by the Judges: 1 (A police officer was the only government witness to offer testimony at trial but was not allowed to be cross-examined.)

Number of Defendants Attending the Trial: 128

Number of Defendants Arraigned by the Presiding Judge: 51 (The remaining 77 were at trial with the other defendants in a cage but were not even acknowledged by the presiding judge.)

Number of Defense Lawyers for all defendants allowed to Attend the Trial by the Presiding Judge: Less than three dozen (many others not allowed)

Number of Witnesses Offered by the Defense Teams: Hundreds

Number of Defense Witnesses Allowed by the Presiding Judge to Testify: None

Number of the Accused Condemned to Death: 529 (including all the defendants attending the trial)

Number of the Accused Condemned to Death but Identified by Defense Lawyers as already Dead before the August Protests: At least 3

Number of the Accused Condemned to Death but Identified by Defense Lawyers as Being Outside Egypt during the August Protests: At least 5

Number of the Accused Condemned to Death but Identified by Defense Lawyers as Minors during the August Protests (it’s unconstitutional to sentence a minor to death in Egypt):
At least 2

But what have been the reactions over the death sentences?

(Note the weak reaction and lack of condemnation or outrage by the US and EU.)

Egypt’s Ministry of Foreign Affairs: The death sentences were “only the first verdict in the trial process…It was reached after careful study of the case.”

Marie Harf, a State Department spokeswoman: “It simply does not seem possible that a fair review of evidence and testimony, consistent with international standards, could be accomplished. [I]t’s an important relationship [with Egypt]…so we don’t want to completely cut off the relationship…”

Catherine Ashton, Foreign Policy Chief of the European Union: “It was with utmost concern that I learnt that the court in Minya in southern Egypt sentenced 529 Muslim Brotherhood supporters to death. Notwithstanding the serious nature of the crimes for which they were convicted, capital punishment can never be justified.”

Sarah Leah Whitson, Middle East Director at Human Rights Watch: “It’s shocking even amid Egypt’s deep political repression that a court has sentenced 529 people to death without giving them any meaningful opportunity to defend themselves. The Minya court failed to carry out its most fundamental duty to assess the individual guilt of each defendant, violating the most basic fair trial right. These death sentences should be immediately quashed.”

Hassiba Hadj Sahraoui, Deputy Middle East and North Africa Program Director at Amnesty International: “This is the largest single batch of simultaneous death sentences we’ve seen in recent years, not just in Egypt but anywhere in the world. Egypt’s courts are quick to punish Mohamed Morsi’s supporters but ignore gross human rights violations by the security forces. While thousands of Morsi’s supporters languish in jail, there has not been an adequate investigation into the deaths of hundreds of protesters. Just one police officer is facing a prison sentence, for the deaths of 37 detainees.”

Sahraoui was referring to the deliberate killing of 37 anti-coup protesters while in government’s custody last August. They were arrested after the Raba’a massacre and were left in handcuffs and shackles for six hours under 110 heat (43) inside a prison vehicle that could only hold twenty people. When they started to shout in protest, the prisoners were gassed by police officers and their corpses burned. After 11 officers were put on trial earlier this month for this massacre, 10 were either acquitted or received suspended sentences.

Meanwhile another mass trial against those opposing the military coup, including senior MB leaders, will open today in the same Minya court before the same presiding judge, with 683 defendants facing similar charges.

While the military coup regime flexes its muscles and shows contempt for any notion of justice or human rights, the world is looking the other way. For many governments it’s back to business as usual with authoritarian regimes. President Barack Obama is rewarding King Abdullah of Saudi Arabia with a state visit this week.

Long gone are the days when Obama declared in 2009 in Cairo that “the ability to speak your mind and have a say in how you are governed; confidence in the rule of law and the equal administration of justice; government that is transparent and doesn’t steal from the people; the freedom to live as you choose are not just American ideas, [but] they are human rights, and that is why we will support them everywhere.” Given his administration’s timid response to the gross human rights violations in Egypt and its open support for authoritarian regimes such as Saudi Arabia and the UAE, which have bankrolled Egypt’s military coup, President Obama’s words now ring hollow. …source