Geneva conference to put an end to dellusions of American Exceptionalism 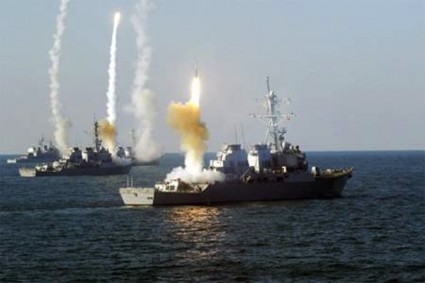 U.S. bets to initiate Russian pressure on the Syrian delegation at the Geneva Conference, to bring it to change its principled positions have failed. The disappointment of Washington appeared in the results of the tripartite meeting in Geneva on Friday between Russia, the United States and Lakhdar Brahimi. At this meeting, Russian Deputy Foreign Minister, Gennady Gatilov, showed great firmness in opposing the Americans and the bias international envoy.

The negotiations in Geneva proves the absence of any compromise already agreed, as some political and diplomatic circles believed at the beginning of the conference. It should be clear to all analysts that the relationship between Russia and the Syrian state is built on a strong partnership and alliance, and not on orders, as is the case in the relationship between the Syrian opposition and their American, Arab and Western masters.

The Syrian crisis is the space in which the partnership between Russians and Americans is being formed. In its efforts to regain its place in the international scene, Russia is based on a solid rock: the resistance provided by the Syrian state, the advance of his troops on the ground and broad popular support that even the worst enemies of Syria can no longer deny.

In its efforts to build this new international partnership, Russia is equal with the West, even if at the beginning of the conference, she closed her eyes to the withdrawal of the invitation to Iran and limiting the representation of the Syrian opposition to the only delegation of the National Coalition. The Russians put an end, Friday, to the U.S. illusions, by fully supporting the position of the Syrian government delegation is uncompromising in priorities: the fight against terrorism must come before any other political issue, because it is the pillar of any future inter-Syrian agreement.

Washington is trying to impose the concept developed by Richard Haass of an international partnership… led by the United States! This is what the Americans are trying in Syria. But this attempt goes against the current balance of power on the ground, which allow the Syrian government, which draws its strength from its army and the support of a large part of the population, to put the world before two alternatives: a compromise built on a partnership in the fight against terrorism, supported by strong international resolutions against all states involved in supporting terrorist movements; or a military solution with the own resources of the Syrian state, which would impose a fait accompli on the field.

Through its information and opinion polls, the West knows that the popularity of President Bashar al- Assad is unwavering. The fact that the Syrian president is the target of the United States has only reinforced his popularity and his image of a Syrian popular leader who resists terrorism and defends the independence and sovereignty of his nation.
Russia wanted to send a strong message of solidarity with Syria, its people and its leader, which has attracted the admiration of the free men of the world with his will to resist. …more