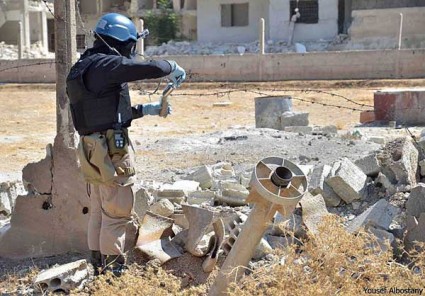 UNITED NATIONS: Syria is charging in a letter to the United Nations that opposition groups are planning a toxic gas attack in a rebel-held area near Damascus so they can then blame it on government security forces.

In a letter dated March 25 and circulated by the U.N. this week, Syria’s U.N. envoy, Bashar Ja’afari, said his government had intercepted communications between “terrorists” that showed a man named Abu Nadir was secretly distributing gas masks in the rebel-held Jobar area.

“The authorities also intercepted another communication between two other terrorists, one of whom is named Abu Jihad,” Ja’afari said. “In that communication, Abu Jihad indicates that toxic gas will be used and asked those who are working with him to supply protective masks.”

Ja’afari said in the letter addressed to U.N. Secretary-General Ban Ki-moon and the U.N. Security Council that this information “confirms that armed terrorist groups are preparing to use toxic gas in Jobar quarter and other areas, in order to accuse the Syrian government of having committed such an act of terrorism.”

A senior Western diplomat, speaking on condition of anonymity, said of the Syrian intelligence: “I don’t give any credence to that.”

A United Nations inquiry found in December that sarin gas had likely been used in Jobar in August and also in several other locations, including in the rebel-held Damascus suburb of Ghouta, where hundreds of people were killed.

The inquiry was only looking at whether chemical weapons were used, not who used them. The Syrian government and the opposition have accused each other of using chemical weapons, and both have denied it. …more