Got Gas? Welcome to Revolution's Morning

As a suburb of St. Louis, Missouri, seethes with anger after the murder of an unarmed black teenager over the weekend, images of demonstrations are reminiscent of protest zones across the globe. With security forces lobbing tear gas canisters at people to quell unrest, individuals sometimes simply pick up the devices intended for crowd control and throw them back at the riot police.

The images below show similar circumstances in many different locales where political discourse is expressed in street clashes. From anti-occupation rallies in the West Bank and sectarian protests in Bahrain to anti-government agitation in Ukraine and Venezuela, marchers are often eager to turn law enforcement’s own techniques against police.

While such photographs may be familiar in unstable Egypt, perhaps they are more shocking emerging from the Midwest of the U.S. 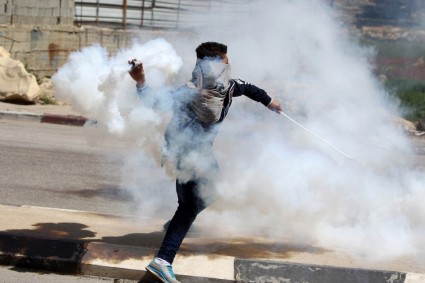 West Bank. A Palestinian protester throws a tear gas canister back towards Israeli police close to the Israel’s Ofer military prison in the West Bank town of Betunia on April 4, 2014, during clashes after Palestinian president Mahmud Abbas rejected appeals from US Secretary of State John Kerry to halt applications to join international treaties to salvage peace talks with Israel.Abbas Momani / AFP / Getty Images 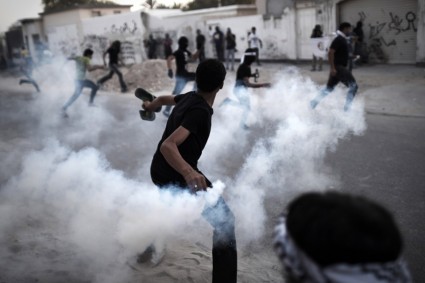 Bahraini protestor throws a tear gas canister back at riot police during clashes following a protest condemning the deaths of Ahmed Al-Mosajen and Ali Abbas, in the village of Al-Maqsha, west of Manama, on April 25, 2014. The two men were killed on April 19, when their car exploded in a Shiite village in Bahrain.Mohammed Al-Shaikh / AFP / Getty Images

« 'Contractual Constitution', latest in rhetorical spin from Bahrain's Reformist Wing (Previous News)
(Next News) Michael Brown Killed 9 August, 2014 – will they ever learn, No Justice, No Peace »