Maiming by Birdshot – The Timoney and Yates Doctrine

The extensive, heavy handed, use of Bird-shot against Protesters did not appear until the Bahrain Regime hired John Timoney and John Yates as Security Consultants at the behest of the US Secretary of State Clinton. It emerged as a means to maim protesters so they could be captured when the sought medical attention. The practice conspicuously evolved immediately following the BICI Report that the regime has largely failed to implement. Has anyone ever noticed how much Iraq’s Saddam and King Hamad look alike – creepy. Phlipn out. 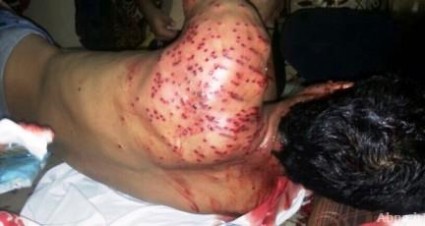 IN THE three years since Bahrain’s iteration of the Arab spring sputtered out in the grip of a government crackdown, Rula al-Saffar, 51, has gone from nurse to detainee to activist. At her home a stone’s throw from the hospital where she is effectively barred from working, Ms Saffar is busy with a campaign she began in December to track and tally Bahrain’s prisoners of conscience.

“Our mission is to get them released and for the government of Bahrain to respect all the international covenants regarding prisoners of conscience,” she said, wearing a t-shirt bearing the image of Martin Luther King Jr. So far, families have registered 161 detainees on the campaign’s website, 56 of whom are students.

This activism is probably not what the ruling Khalifa monarchy hoped for when it brought criminal charges against Ms Saffar and 20 other medics for their alleged support for anti-government protests that took place in February and March of 2011. Rather than give up, Ms Saffar is now turning other Bahrainis into amateur medics.

After being released from her five months in detention in 2011, during which Ms Saffar said she was electrocuted, slapped around and sexually harassed, she was told she could only return to her job as head of a nursing program at Bahrain’s College of Health Sciences if she swore an oath of loyalty to the regime. She refused.

Now she delivers instructions for basic medical treatments over Skype, fearing that treating protesters in person could land her back in jail. Nearly every week, she says, she gets phone calls from those at protests in Manama’s Shia-majority suburbs such as Karrana and Sanabis, hotspots for dissent against the ruling Sunni Khalifa family, asking how to dress wounds.

The difficulty of Ms Saffar and many of her fellow medics is linked to the decision of both protesters and security forces to make Salmaniya, the country’s only full-service public hospital, a flashpoint of the 2011 unrest. Bahraini security forces in March 2011 took control of Salmaniya and cordoned off part of the sixth floor to interrogate patients, an independent commission found. The commission also concluded that some doctors in Salmaniya strayed from medical neutrality by participating in anti-government demonstrations.

Bahrain’s medical system has yet to recover from this politicisation. Doctors detained in 2011 who have returned to work say that it is still not safe for those wounded in clashes with police in ongoing unrest to seek treatment at a public hospital, or even at some private clinics.

According to a doctor working in Salmaniya, a patient who shows signs of protest-related wounds—burns to the hands or birdshot to the body—will be interrogated by a hospital security guard, often before a nurse or doctor has seen him. The guard then monitors the patient throughout his stay in Salmaniya and often arrests him after he is discharged, the doctor said. This exact scenario is difficult to verify (the Ministry of Health declined to comment by phone), but several doctors interviewed agreed that the threat of arrest hangs over protesters who check into a hospital. Protesters now tend to avoid hospitals unless gravely wounded.

Some doctors try to help by quietly treating people. “It’s my medical obligation to treat those regardless of the type of injury or the trauma inflicted on them,” said a surgeon who runs a private clinic in Manama. In recent weeks, he treated a teenager whose orbital socket had been broken, allegedly by a combination of a stun grenade and a policeman hitting him in the face.

The doctor asks protesters to lie low until bodily signs of clashes with the police have subsided. He then registers the patient as suffering from a cold or simple ailment that won’t draw the attention of security forces. He stitches the protester up, prescribes medication and sends him on his way. …more