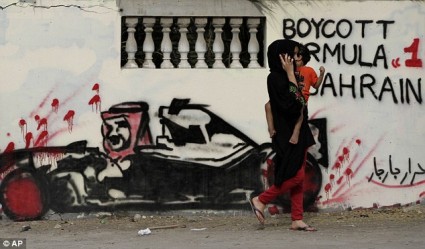 Katy Clark took the opportunity to introduce a Early Day Motion 1194 which calls on the UK government to oppose the 2014 Formula One race in Bahrain “due to ongoing human rights violations.” The EDM also recalls concerns over the sexual abuse in custody of Rihanna al-Mousawi who was detained at the Bahrain Formula One track in 2013. It also recalls concerns over the extrajudicial killing of protester Salah Abbas during the race in 2012 by security forces. 25 MPs have signed the EDM to date.

Acting President of the Bahrain Centre for Human Rights, Maryam al-Khawaja, began the discussion by highlighting the ongoing grave human rights violations in the country. She highlighted the dangers of the new Gulf Cooperation Council Security Agreement that “infringes upon the basic rights of all GCC citizens.” Ms. Khawaja furthermore highlighted the stringent environment and reprisals faced by human rights defenders in Bahrain and refuted the speech made by the Bahrain Foreign Minister in Geneva earlier this month noting:

“Bahrain uses terrorism as an explanation to justify the crackdown against individuals in the country, whilst attempting to convince F1 that it is safe to race in the country. Why are they hosting the F1 if there is terrorism in Bahrain? F1 would not go to Bahrain if that was the case.”

OECD Complaint Launched Against Formula One

Daniel Carey, who headed a legal team to file an OECD complaint to stop a 3 million shipment of tear gas canisters to Bahrain, took the opportunity to announce that an OECD complaint has been filed by Americans for Democracy and Human Rights in Bahrain against Formula One Management, sponsors and teams in the UK. The complaint alleges that the defendant organisations have not mitigated the human rights impact caused by their actions in the country. The complaint has been filed with the United Kingdom Department for Business, Innovation, and Skills in London, which is the UK’s National Contact Point for the OECD Guidelines.

According to the 2011 OECD Guidelines for Multinational Enterprises, organisations have a responsibility to “… avoid causing or contributing to adverse human rights impacts and address such impacts when they occur.” Organizations falling under OECD jurisdiction additionally must “seek ways to prevent or mitigate adverse human rights impacts that are directly linked to their business operations…” and “carry out human rights due diligence…” as appropriate to their involvement with abuses.

Mr. Carey also highlighted ’irresponsible statements’ made by Bernie Ecclestone in the past regarding the staging of the race in Bahrain. …more

« That this House opposes the staging of the 2014 Bahrain Grand Prix (Previous News)
(Next News) Break The Shame, Break The Silence, Break The Chains, NO Bloody F1 Race in Bahrain »