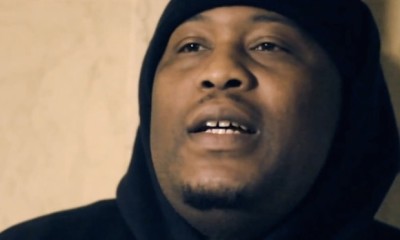 The San Diego rapper charged with conspiracy over an album reflecting gang culture is just the latest hip-hop artist to have his words used against him in court.

Tiny Doo is allegedly benefiting from increased sales of his album.

As rappers go, Brandon Duncan’s approach is not unusual: his lyrics reflect the violent reality of the streets. But in the pantheon of rappers who have had run-ins with the courts, Tiny Doo looms large. Despite his lack of a criminal record, Duncan stands accused of nine counts of participating in a “criminal street gang conspiracy”, charges that could land him in prison for life.

But Duncan is not charged with participating in any of the crimes underlying the conspiracy, or even agreeing to them. Rather, he’s effectively on trial for making a rap album.

While details are sparse and the evidence presented against Duncan thus far is reportedly thin, prosecutors appear to be operating on the premise that criminal activity by others, mentioned in Duncan’s lyrics, benefits sales of his album No Safety. “We’re not just talking about a CD of anything, of love songs,” Deputy District Attorney Anthony Campagna argued to the court at Duncan’s preliminary hearing this month.

The San Diego County district attorney’s office declined to comment on the case to the Guardian, instead pointing to comments by the gangs division chief prosecutor, Dana Greisen, asserting: “Rap music, it’s just another form of communication that gang members use” in furtherance of their crimes.

Putting a musician on trial for his lyrics is antithetical to Americans’ free speech rights, and quite possibly unconstitutional. What’s more, the “criminal street gang conspiracy” law that Duncan is charged with violating – part of an anti-gang initiative package passed by California voters in 2000 – stands in marked contrast to conspiracy as California has traditionally defined it.

Ordinarily, to be guilty of conspiracy in California an individual must agree with another person to commit a crime, then at least one of them must take action to further that conspiracy. The charge Duncan faces requires no such agreement: so long as prosecutors can show that Duncan is an active member of the gang and knows about its general criminal activity, past or present, he can be convicted for benefiting from its acts.

This kind of legislation is often born of moral panic, and can lead to ill-advised prosecutions. But the manner in which it is being applied to Duncan should disturb all who care about free expression. Under the prosecution’s logic, acclaimed photographer Danny Lyon might never have finished The Bikeriders, let alone made later photographs documenting the American Civil Rights Movement, prison conditions in Texas, or the continuing effect of the US government’s genocide of Native Americans, because his affiliation with the bikers he photographed would have landed him a long prison sentence. …more