Obama, Al Saud back to arming terroists groups in Syria after fascist plans in Ukraine checked 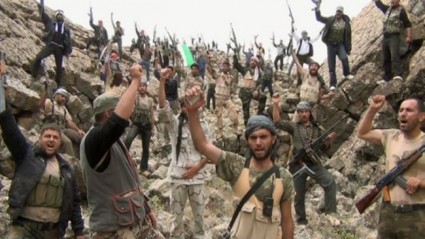 The United States is considering allowing shipments of portable air defense systems to Syrian opposition groups, a U.S. official said Friday, as President Barack Obama sought to reassure Saudi Arabia’s king that the U.S. is not taking too soft a stance in Syria and other Mideast conflicts.

A Washington Post report said Saturday that the U.S. is ready to step up covert aid to Syrian armed groups under a plan being discussed with regional allies including Saudi Arabia.

The plan includes CIA training of about 600 Syrian opposition forces per month in Saudi Arabia, Jordan and Qatar, foreign affairs columnist David Ignatius wrote on Thursday. That would double the forces currently being trained in the region.

The Obama administration was debating whether to use U.S. Special Operation forces and other military personnel in the training, something Syrian mercenaries have argued would carry less political baggage than the CIA, according to the column.

The Obama administration has been criticized by some in Congress for failing to do more in Syria, where 140,000 people have been killed so far, millions have become refugees and thousands of foreign gunmen have been trained since 2011.

Washington was also considering whether to provide the armed opposition with anti-aircraft missile launchers, known as MANPADS, to stop President Assad’s air force, the column said. Saudi Arabia wanted U.S. permission before delivering them, it said.

The plan, which was still being formalized, also called for vetting of opposition forces for “extremist links” during and after training, according to Ignatius.

Qatar has offered to pay for the first year of the program, which could cost hundreds of millions of dollars, according to the column. The program would try to stabilize Syria by helping local councils and police in areas not under Assad’s control and seek to establish safe corridors for humanitarian aid, it said.

Saudi rulers are hoping for the United States to shift its position on support for Syrian armed opposition, whom Riyadh has backed in their battle to oust President Bashar al-Assad. …more