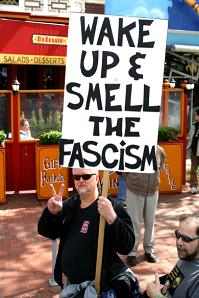 “Those who cannot remember the past are condemned to repeat it.” – George Santayana

Some years ago Italian anarchist Camillo Berneri suggested that while not always visible in the social practices of everyday European life, the racist foundation for European fascism was still present, safely confined to a space in the European psyche but always ready to explode in what he called a racist delirium.

Today, white workers and the middle classes in Europe and the U.S., traumatized by the new realities imposed on them by the decline of the Western imperialist project and the turn to neoliberalism, are increasingly embracing a retrograde form of white supremacist politics.

This dangerous political phenomenon is developing in countries throughout the European Union and in the U.S. Just recently, the National Front, a racist, authoritarian party that labored on the fringes of French politics for years, has emerged as one of the dominant forces in French politics. The Tea Party in the U.S., Golden Dawn in Greece, the People’s Party in Spain, the Partij Voor de Vrijheid in the Netherlands – in these and other countries, a transatlantic radical racist movement is emerging and gaining respectability.

The hard turn to the right is not a surprise for those of us who have a clear-eyed view of Euro-American history and politics. In all the 20th Century fascist movements in Europe, two elements combined to express the fascist project: 1) the rise of far-right parties and movements as the political expression of an alliance of authoritarian, pro-capitalist class forces bankrolled by sections of the capitalist class and constructed in the midst of capitalist crisis; and 2) racism grounded in white supremacist ideology.

The neo-fascism that is now emerging within the context of the current capitalist crisis on both sides of the Atlantic has similar characteristics to the movements of the 1930s but with one distinguishing feature. The targets for racist scapegoating are different. The targets today are immigrants: Arab, Muslim and African in Europe; Latinos and the never-ending target of poor and working class African Americans in the U.S.

What makes the rise of the racist radical right even more dangerous today is that it is taking place in a political environment in which traditional anti-racist oppositional forces have not recognized the danger of this phenomenon or for strategic reasons have decided to downplay the issue. That strategy has been tragically played out in the “immigrant rights” movement in the U.S.

The brutal repression and dehumanization witnessed across Europe in the 1930s has not found generalized expression in the U.S. and Europe, at least not yet. Nevertheless, large sectors of the U.S. and European left appear to be unable to recognize that the U.S./NATO/EU axis that is committed to maintaining the hegemony of Western capital is resulting in dangerous collaborations with rightist forces both inside and outside of governments. …more

US fascism Uncategorized No Comments »

« Judge opens files to inquiry beyond FBI "secrecy" about Miami, Saudi family connection to 9/11 (Previous News)
(Next News) America's double minded policies and the fruit of it's emerging neo-fascist nature »