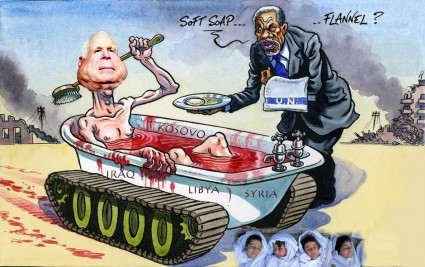 BEIRUT: Militants from the Al-Qaeda splinter group ISIS have taken over the town of Markada in Hassakeh province in fighting with the Nusra Front and other Islamist militias, according to pro-opposition media and an activist group. The reports said that a local commander of ISIS, a Turkish national, was killed in the fighting, which claimed the lives of five ISIS fighters and approximately 40 Nusra Front members.

The town lies on the highway linking the cities of Hassakeh and Deir al-Zor.

ISIS is engaged in fighting against the Nusra Front and its allies, as well as a separate campaign against the YPG Kurdish militia.

The Britain-based Syrian Observatory for Human Rights said Saturday that it could confirm at least 16 ISIS fatalities in the infighting, while the other side’s losses remained undetermined.

Also in Hassakeh province, the Kurdish YPG wrested control of a village, Jazaa, from ISIS, which suffered at least 14 fatalities during three days of fighting.

In Raqqa province to the east, where ISIS enjoys its strongest presence in the country, the Observatory said the group alerted residents via minarets in the town of Raqqa to “open their windows and open up closed places” as the group was planning to carry out the second stage of the demolition of a local shrine. …more

« Bahrain has rich future with Al Khalifa gone – US, UK must repent on broken foreign policies (Previous News)
(Next News) Obama, Al Saud back to arming terroists groups in Syria after fascist plans in Ukraine checked »