Bahrain Children in Chains – Hostages in a Tyrant King's, Politics of Repression

Children of Bahrain: Those who oppose the regime are in prisons
01 August, 2014 – Shafaqna

SHAFAQNA – Why are more than 190 Bahraini children spending Eid inside the prison cells of the “Prison Island” as, the US Assistant Secretary of State, Tom Malinowski described it?

The very first Eid to occur during the period of the 14th February uprising, saw on 31st August 2011 an event that turned Eid celebrations into mourning and sadness. This was the killing of 14-year-old Ali Jawad Al Shaikh, who was shot and killed at the hands of the regimes security forces in Sitra.

Since this time, Eid in Bahrain has changed into protests. However, Eids has been an opportunity for the regime to continue to harvest the lives of a children; a martyr, a detainee and a tortured. Eid is sometimes considered an occasion to remember these children behind the bars whose number has exceeded the hundreds. Other times and for others, Eid is but a time for tragic events.

According to Al Wefaq statistics, the children in the Bahraini prisons have exceeded 450 since the beginning of the revolution on 14 February 2011 until September 2013.

Between 14 February 2011 and until November 2013, the extrajudicial killing cases have resulted in 16 deaths of children. And now the number has surpassed to 20.

On 13 June 2012, the 5-year-old child, Ahmed Alnham, was next to his father who works as a fish seller in one of Al Dair’s neighborhoods when the regime’s forces directly shot Ahmed in his face. Ahmed Alnham lost one of his eyes in front of his parents with blood covereing his face.

Some schools’ administrations called some students’ parents for investigation sessions because of drawings on the students’ desks like Lulu Roundabout. The 8-year-old- Hisham Hassan was suspended from the school on 8 January 2013 and got beaten by the school’s administration members in front of his peers for repeating political slogans. Hisham was entered into a school commission inquiry without his parents knowledge.

Although he was imprisoned, Al Wefaq honored, on 24 July 2014, the outstanding youth, Mohammed Abdulrida Al Jalabi, who graduated from high school with an average of 95%. An empty seat on the platform was specialized for Al Jalabi, where his photo was placed. …source

Fully Supported by the US, Bahrain imprisons Children – Tell Obama to Stop it

Bahrain Regime Routinely Arrests Children as a means of terrorising families who have members that are politically active. Some Children face rape and torture by Bahrain Prison Guard and are force to stay in overflowing prisons with the adult population. There is no independent oversight and Red Crescent does not have free access to Bahrain’s Political Prisoners. 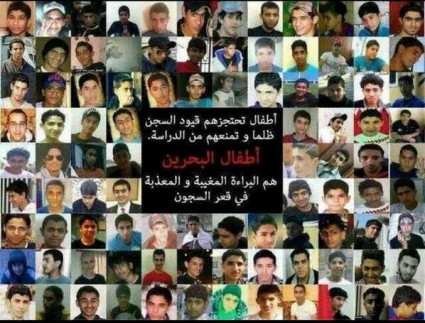 Pictures of a Small Part of Bahrain’s Imprisoned Children