Speak Up for Hussain Hubail, a photographer illegally detained and dying in Bahrain Jau Prison

Hussain Hubail, is struggling to get medical care and survive in Jaw Prison. If he gets a consultant’s appointment the prison refuses to provide transport. Hussain’s Appeal on 20th August against his 5 year sentence was postponed until 21st September.
If the US and UK Governments don’t want this young man to die in prison, they should use their influence to get him released on medical and humanitarian grounds.

Hussain’s crime, like all the photographers, is to take pictures of the attacks on unarmed demonstrators by the Bahraini police force, most of whom aren’t Bahrainis. They have documented the Khalifas’ attack on freedom of speech and assembly so the world knows what is going on. The Khalifas want them silenced, so they have detained and tortured them. This is dangerous work with three journalists killed and 25 sent to prison. 14 photographers are in prison today with sentences from 3- 10 years.

Professor Abhi Prasad at St Georges Hospital, Tooting has agreed to treat Hussain if we can get him released. What can you do to help? This is URGENT – Hussain has had no medicine since April 2014 when he left Dry Dock Detention Centre and was moved to Jaw Prison.

Please contact your Congressmen or MP and ask them to ask the al Khalifa regime to allow treatment. 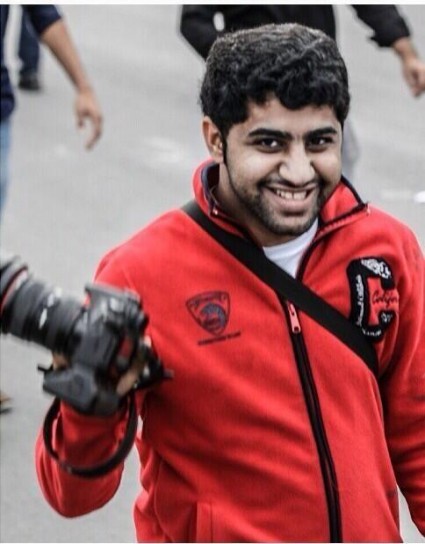 Hussain Hubail, 21, has pains in his chest and severe palpitations, low sugar levels and high blood pressure. Was unconscious for twelve hours on 13 Feb 2014 when rushed to hospital. Rushed to hospital 5 times in last eight months.

Increased frequency of collapses since January 2014. Salmanya Hospital consultant thinks he may have Beams contraction of the heart muscles and could need an angioplasty. He has heart spasms and faints.

Abhi (Professor Prasad) intends to do a full series of tests on him to see whether he needs an operation. If the latter he will be operated on at St George’s Hospital Tooting where Abhi is Head of the Cardiology Unit.

The Government said he could have an operation at the military hospital but there would be months of delay as only two surgeons Although the surgeon is fine, Hussain’s parents see the hospital as part of the military/prison regime that have almost killed their son. His grandfather went to the military hospital for the same operation two years ago and died. There is no heart surgery unit at Salmanya Hospital.

Every time Hubail collapses he is stabilised and then send back within a day to the terrible prison conditions: overcrowding (twelve detainees in cells for five), no beds, no clean water to drink, little water to wash, poor food, cold in winter and no winter clothes allowed. There would be no after care and he will not get the correct medication. Therefore he is unlikely to benefit from having the operation in Bahrain.

He needs daily medication but gets it intermittently, or once a week which is hopeless. This has contributed to his deterioration. I and the Bahraini campaigners feel his only chance of survival is to come to the U.K. where he can be properly treated, operated on, and given the correct after care and medication.

Hubail’s case is urgent and he was back at the hospital clinic this week. Please contact your, MP, Congressperson or Senator and bring influence to bear. This young man has done nothing except take photographs which is his job. He needs your help before he dies in prison. 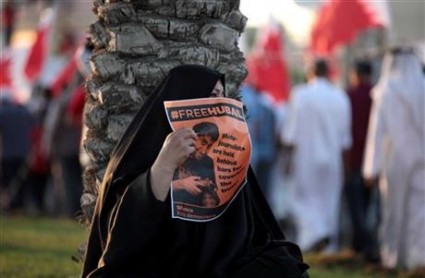 Photographer Hussain Hubail is about to receive his verdict. He is on trial together with eight other men on charges arising from their exercise of their right to freedom of expression. He has been denied adequate medical treatment.

Hussain Hubail’s trial, which began on 28 November 2013, will have its fifth hearing on 16 March: the court will hear final pleas, and is expected to announce its verdict shortly afterwards. Hussain Hubail is on trial together with eight other men, including Mohammad Hassan Sudayf, on charges that include using social media networks to incite hatred of the regime, calling on people to ignore the law and calling for illegal demonstrations.

During one of the hearings, on 27 January, he is understood to have told the court he had been tortured and threatened with rape during his interrogation. He had told his family when they visited him in prison that he had been threatened and beaten while being interrogated at the Criminal Investigations Directorate (CID). Hussain Hubail has a heart condition, and fears he is not receiving adequate medical treatment. He has to wait before he receives the medicine he needs. His family said his health had deteriorated: he suffers from shortness of breath and frequently loses consciousness. He was transferred to hospital on 13 March following severe breathing difficulties, but security officers prevented his family from staying with him as he received treatment.

Please write immediately in English, Arabic or your own language:

Calling on the authorities to release Hussain Hubail immediately and unconditionally if he is being held solely for peacefully exercising his right to freedom of expression;

Urging them to drop charges against the other defendants if they are being targeted solely for peacefully expressing their opinion;

Urging them to ensure that Hussain Hubail receives adequate medical care, including any specialist treatment needed for his heart condition;

Calling on them to order an independent investigation into Hussain Hubail’s allegations of torture and other ill-treatment, and bring those responsible to justice. …more

URGENT
– Hussain Hubail’s medical reports show he needs a chance to go abroad for heart treatment. His mum is concerned about him being operated on in the military hospital. Hussain is in court on 16th March with Jassim al Nouaim.

Court session for Hussain Hubail and Jassim Al Nuami today. Hussain is looking at whether he could have his heart operation abroad. Jassim’s dad stood up in court and bravely said his son was abroad on the dates in 2011 and 2012 for which he’s been accused. He’d applied to join the Dept of information and had never got involved in demos.

Appointment for Hussain at military hospital on 16th March the same day as their next court session!

Sayed Ahmed Al Mousawi, photographer who got arrested on the 10th Feb 2014, just won more awards while he is in prison, in the 2nd Greek Photographic Circuit 2014:

Qassim Zainaldeen, cameraman, was on trial today (16th Feb 14.) He is accused of vandalism inside the prison on August 2012. One of the prosecution witnesses at the session today, said that on the day of the incident in Dry Dock Prison, they were sleeping and the officer Hisham Al Zayani woke them up with a baton and asked them to stand facing the wall. Other police entered the room and beat them. Then their hands were handcuffed and they were forced to stay under the sun in August for around 5 hours. Some of them needed treatment for their injuries and some were very tired because of the heat.

Today Hussain Hubail, 21, a photographer detained since July 31st, had a medical appointment at the hospital with him mum.

When his condition got stable he was transferred to the Dry Dock Prison again. Hubail stayed in Salmaniya hospital complex for nearly 12 hours and was unconscious.

Hubail suffered several months ago from beams contraction of the heart muscle, shortness of breath, high blood pressure and fainted several times in prison. He told officials about his condition, but they largely ignored it for two months before they allowed his visit to the doctors at the Salmaniya Medical Complex for treatment.The prison administration don’t give him his medication to reduce blood pressure, which he needs once a day, but only once a week.

The regime use the lack of medical care to control the prisoners which has lead to a number of deaths. Hubail goes to court on January 27th and we would like to get him out on bail immediately.

I’m contacting Irish and British medics to get support. Please contact your Congressman to take action for Hussain.