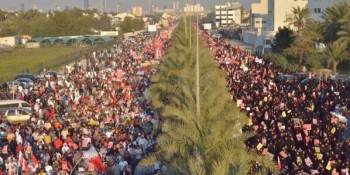 Prominent human rights activist Maryam Alkhawaja has been jailed in Bahrain. She was detained at Bahrain International Airport on Friday as she tried to enter the country, and has yet to meet with her lawyer.

Alkhawaja, a dual Danish-Bahraini citizen, had her Danish passport confiscated and was told she no longer held Bahraini citizenship. She was also barred from using her phone or contacting her family, according to the Gulf Centre for Human Rights (GCHR), the organisation of which she is co-director. GCHR also reported that she was interrogated on charges of assaulting and injuring police officers, while lawyer Mohamed Al Jishi said he was not allowed to speak to his client before she was questioned. She is currently held in Isa Town women’s prison.

Alkhawaja was travelling to see her imprisoned father, who last week started a hunger strike. Abdulhadi Alkhawaja is a Bahraini human rights campaigner who co-founded the Bahrain Centre for Human Rights (BCHR), which won the 2012 Index Freedom of Expression Award for Advocacy. He was sentenced to life in prison on terrorism charges following pro-democracy protests that swept the country in 2011. Abdulhadi and his daughters Maryam and Zainab are outspoken critics of human rights violations in the constitutional monarchy, which is categorised as “not free” by Freedom House.

The case first gained attention after Alkhawaja tweeted about being detained on Friday, and an unnamed person close to the family continues to provide updates through her Twitter account. On Saturday, the account reported that she is also facing charges of insulting the king of Bahrain and over an anti-impunity campaign she was involved with in November 2013.

Human Rights Watch called the arrest “outrageous”, while GCHR has labelled the charges “fabricated” and has called on the international community to put pressure on Bahraini authorities to release father and daughter. The Danish Ministry of Foreign Affairs is sending a representative to Bahrain to provide support. Foreign Minister Martin Lidegaard tweeted on Sunday that a “solution must be found in Al-Khawaja case” and that he has raised the issue with the European Union.

This comes as the Supreme Court of Appeal in Bahrain on Sunday upheld a 10-year sentence on photographer Ahmad Humaidan. He was convicted over an attack on a police station in 2012, but human rights groups believe the case against him is connected to his coverage of pro-democracy demonstrations. …source