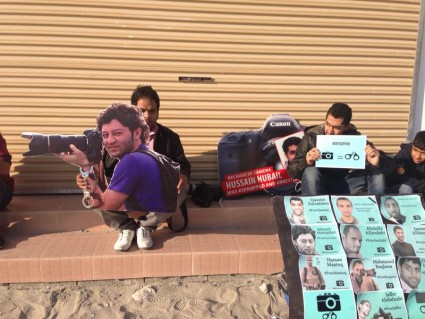 Mohammed Al Oraibi, 30 years old, freelance photographer, got arrested from the airport coming from Lebanon, on the 2nd Feb 2014. Disappeared.

He was arrested previously in Sep 2012, for 3 months. His cameras and electronic organs were confiscated the next day, when 5 policemen in a plain clothes, raided the house, Mohammed was with them to lead them where his devices are and since then, no one knows anything about him.

– Sayed Ahmed Salman Al Mousawi, 26 years old, free lance photographer, who owns his own studio and is a winner of more than 120 international prizes in photography. He was arrested this morning

(10 Feb 14) with his brother from his place in Duraz. His brother Sayed Mohammed was beaten during detention but not him. His cameras and electronic organs were confiscated during the arrest.

No arrest warrant was presented from the plain clothes masked policemen.

– Sadiq Al Shabaani, theatre and TV actor, was arrested on the 27th Jan 2014, in Oman at the request of the Bahraini government. His family knows nothing about where he is and his situation, and whether he is in Bahrain or in Oman. He was arrested for a month in June 2012 accused of illegal gathering and incitement to hatred of the regime.

He is accused being part of 14Feb media network, calling and participating at unauthorized demonstrations, inciting the regime hatred and having connection with some Bahraini opposition living in exile.

– Hussain Hubail is a freelance photographer, 21 years old, accused of being part of 14Feb media network, calling and participating at unauthorized demonstrations, inciting the regime hatred and having connection with some Bahraini opposition living in exile.

Hubail was arrested on 31 July 2013, he was forced to stand for three days and he was punched and kicked. He was exposed to insults and humiliation while he was interrogated. At the last court session Lieutenant Fawaz AlSameem who was summoned to be a witness of proof and Hussain faced him and accused him for being responsible for his torture and threatening him with rape.

– Qassim Zain Aldeen, 25 years old, freelance cameraman, was arrested earlier in 2012 for more than 6 months, then arrested again on Friday 2nd August. He films opposition protests in Bahrain, has had his work published by local websites and blogs. He was accused of participating in illegal gathering, now accused of vandalism in prison. He got sentenced 3 months for illegal gathering and then on 5th Jan 14, he got sentenced 6 months for illegal gathering and vandalism., He awaits another sentence on the 16th Feb for vandalism inside the court.

His next court session is on 26th March 14 for verdict. In trial hearings there is no evidence against Humaidan, as he had been tortured during his detention through psychological threats to get confession.

– Jassim Alnuiami, online activist, Scriptwriter and works with production teams to produce videos, was arrested on the 31 July 2013, after raid on his house in Sehla, and all his electronic devices were confiscated. He was taken to the CID building for 3 days, where he was beaten, tortured, threatened and insulted, he stated to his family that he was beaten while blindfolded on his head, kidneys, and on his private parts. He was threatened by Lieutenant Fawaz AlSameem who was summoned to be a witness of proof in the last court session that his mom and sisters will be raped if Jassim didn’t confess.

– Hassan Matooq, photographer, charged with publishing false and malicious news and statements, and inciting public contempt and hatred of the regime, in addition to take photos of the protesters at pearl roundabout and delivering the images to the media tent., And participating in an illegal gathering. sentenced for 3 years since March 2011. Concern: Will he be released?

– Mahmood AbdulSaheb, photographer, charged with publishing false and malicious news and statements, and inciting public contempt and hatred of the regime. Taking photos of the protesters at pearl roundabout and delivering the images to the media tent, and participating in an illegal gathering. He was sentenced for 3 years since March 2011. Will he be released?

– Jaffar Marhoon, 25 years old, cameraman, was arrested from a barber shop on 26th Dec 13, he is accused of an explosion in Dimistan, where he lives. He worked in the fields of filming and theater in the past few years. According to his family, he was exposed to torture for 3 days in CID, and then he was transferred to Dry Dock prison.