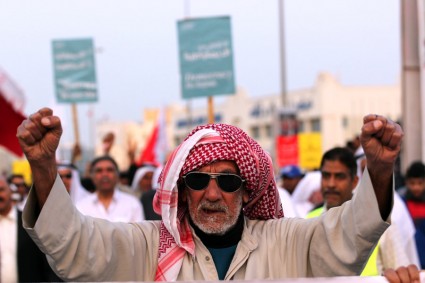 Hussain Hubail is a freelance photographer, 21 years old, he photographs opposition protests in Bahrain, has had his work published by Agence France-Presse and other news outlets. In May, independent newspaper Al-Wasat awarded him a photography prize for his picture of protesters enshrouded in tear gas. Voice of America has published his photos. More of his work can be found HERE

Mr Hubail was accused of being part of 14Feb media network, calling and participating at unauthorized demonstrations, inciting the regime hatred and having connection with some Bahraini opposition living in exile.

Hubail mentioned while he was interrogated, that he was forced to stand for 3 days, punched and kicked, and was exposed to insults and humiliation.

He was taken to the prosecutor 14 Aug 2013 to confirm his testimony without a lawyer, and then in the afternoon, the prosecutor visited him at dry dock prison, where he is now to renew his detention for 45 days, on the unauthorized marches charge.

He is suffering from heart pains, shortness of breath and hasn’t been transferred to the hospital, the prison clinic gave him some random medicine according to his mom. It took the authorities two months to take him to the hospital to get proper treatment.

Lieutenant Fawaz AlSameem who was summoned to be a witness in the next court session is the same person who interrogated them and was responsible for their torture. Next court session on the 27th Jan 2014.

Qassim Zain Aldeen, 25 years old, freelance cameraman, He was arrested in 2012 for more than 6 months, then arrested again on Friday 2nd Aug, He films opposition protests in Bahrain, has had his work published by local websites and blogs.
He was accused of participating in illegal gathering, now accused of vandalism in prison.

Ahmed Humaidan, freelance photographer, arrested on the 29th December 2013 is in jail, accused of attacking a police station in Sitra with Molotov cocktails, No evidence. Next court session is 29th Jan 2014.

Trial hearings showed there is no evidence against Humaidan, He had been tortured during his detention through psychological pressure to extract confessions under threat.

Abdulla Al Jerdabi, photographer, still arrested since 13 Sep 13, accused of participating in illegal gathering.
He was beaten by police forces, on the way to the police station which caused his knee bruises that are still painful, and a cut under his lips.

When the officer realized that he was a photographer he threatened him to face a dark era. Released on 30 Oct 2013.
But he was transferred from Al Khamis police station to Nouaim police station to arrest him again., He’s accused of illegal gathering and possession of iron bars aiming to attack police.

Jassim Alnuiami, online activist, Scriptwriter and works with a production team to produce videos, Arrested 31 July 2013, in a raid on his house in Sehla, and all his electronic devices were confiscated. He was taken to the CID building for 3 days, where he was beaten, tortured, threatened and insulted, he stated to his family that he was beaten while blindfolded on his head, kidneys, and on his private parts.

He was threatened that his mom and sisters will be raped if he didn’t confess.

Ahmed AlFardan, NurPhoto photographer, 23 years old, who also does photography for Demotex and Sipa press agencies Arrested on the 26th Dec 2013. Around 16 police car surrounded his house around 3:00 in the morning, around 10 masked policemen in a civilian clothes raided his house, confiscated his cameras and laptop, No arrest warrant.
AlFardan was arrested on 8th Aug 2013, outside a cafe near his home by two plain clothed policemen. The police, who told him they needed to ‘speak with him for five minutes’, took him to a car where he was beaten – one policeman punched him while the other choked him, He was told by the policemen that their ‘manager’ wanted him arrested – but this could be avoided if he agreed to work with them.

He was promised cameras and money in exchange for any information about Tamarod (August 2013) rallies, media, and journalists. He was asked to photograph clashes and protests, and then provide the policemen with the pictures – and if he didn’t comply there would be consequences. The policemen showed him a pistol and told him that they can reach him anywhere “we can raid your house, I can come to you anytime, I know your number, I know your home, I can arrest anyone from your family. I can arrest you and charge you for more than 15 years in jail with any charge”. He was released few hours later.

According to Al-Fardan, the same person who threatened him, is the one who arrested him, where he remained in CID for several days where he was beaten, and got two broken ribs, he is now in Dry Dock prison and needs a health care, which he does not got. Prevented from meeting his lawyer.

Hassan Matooq, photographer, charged with publishing false and malicious news and statements, and inciting public contempt and hatred of the regime, Also taking photos of the protesters at Pearl roundabout and delivering the images to the media tent, and participating in an illegal gathering. – Sentenced for 3 years since March 2011.

Mahmood AbdulSaheb, photographer, charged with publishing false and malicious news and statements, and inciting public contempt and hatred of the regime, Took photos of the protesters at Pearl roundabout and delivered them to media tent., Participated in an illegal gathering. – Sentenced for 3 years since March 2011.