Apart from the street thugs, opposition figures living outside the kingdom are seriously compromising the security and integrity of Bahrain. Those countries harbouring extremists and radicals should do their international obligation of stopping or extraditing them.

Last week’s violence claimed the life of a policeman and severely wounded another officer in a bomb explosion in Dair. This heinous crime, perprtrated by the opposition is yet another sign of the policy of violence and vandalism they have been following for ages as a pretext for ‘democratic reform’.

Those opposition figures who called for the illegal rallies and the concomitant violence and vandalism are responsible for the death of the policeman. Thus they have blood on their hands.

The incident was condemned by both the government and by Western governments. The social media show that most of the condoning and agitating of violence was promoted by opposition personalities living abroad including the UK, Lebanon and Iran.

Save Lebanon and Iran. Given the Bahrain-UK long-standing relations and cooperation in almost all sectors from trade to security, the UK should help track down the perpetrators of violence in Bahrain while living abroad. They are exporting and campaigning terrorism against a sovereign nation. As it is not expected to harbour terrorists, the UK should play an active role by stopping the heinous crimes manufactured in its soil by bringing the suspects to justice.

The death of the policeman is one of courage, patriotism and heroic duty. As Ash Sweeney quotes “I have learnt that heroes are the people who do what has to be done when it needs to be done regardless of the consequences”.

The incident is a reflection of the degree of restraint the police forces are showing during their operations, the police being the prey rather than the predators.

On the other hand, the street thugs who have grown violent of late and use whatever means at their disposal to target security forces, including live ammunition in some instances, are becoming more sophisticated both in tactics and the forms of weapons used.

This calls for an urgent shift in the tactics and techniques used in crowd-control mechanisms and during confrontation with thugs. The use of tear gas or bird shots may not work in the future. The police need to be equipped properly, at least to protect themselves. …more 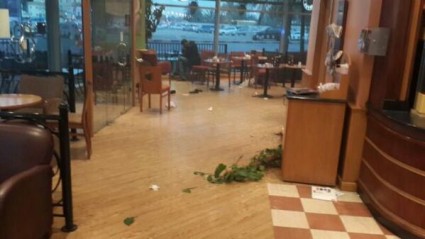 This Coffee Shop has Suffered only Minor Damages from a Scourge for Police Violence launched against businesses that serve Shia Patrons.