Redha al Ghasra and eight others, captured, tortured after brief escape from injustice 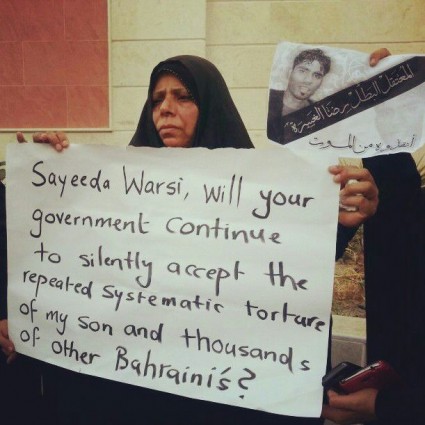 Redha al Ghasra and eight people escaped from prison recently. They were picked up and he is now being extensively tortured. He had seconds on the phone to his parents to say he was fine and sounded terrible. He was sentenced to 42 years and received none of the normal prisoner privileges. He has been in solitary confinement for weeks. In a previous escape, he dressed up as a woman and when captured was tortured in the road, in front of the people.

His family demonstrated outside the CID building and were threatened that if any picture was taken, they couldn’t see their son. His Mum’s poster says:

Sayeeda Warsi, will your Government continue to silently accept the repeated systematic torture of my son and thousands of Bahrainis?

The Ghasra family have had 70 raids on their home and two of Redha’s brothers are in exile. So what is your Government going to do? Will it ignore what is happening to the Bahrainis, like the plight of the Jews in the Second World War, or do something honourable and intercede?