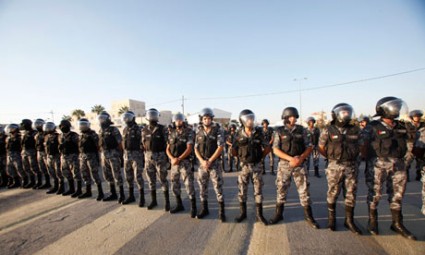 The documents issued by the Bahraini Ministry of Interior on February 11, 2014 and fully published by “Bahrain Mirror” unveil the names, salaries and bank accounts numbers of all policemen found in Bahrain. These documents also show that these names were merged within the ministry staff.

Moreover, these critical documents signed by the finance affairs manager related to the Ministry, Khaled Abdullah Ali Almoaili, reveal that transferring the police’s salary happens via Arab Jordan Bank, where the salaries are asked to be paid to those “attributed to the Ministry” who appear to be of the blood of known Jordanian families.

This new information refutes the announcements of the Jordanian Minister of State for Information Affairs, Official Spokesman of the Jordanian Government, Mohammed Hussain Al-Moumini, who said yesterday on Tuesday, April 1 that “the Jordanian policemen are found in Bahrain for training purposes and for qualifying the Bahraini policemen.”

A letter dated on February 11, 2014 holding the number “A-M-4-6-361” under the title of “Dues to those attributed to the ministry” states that: “enclosed, you will find payment returns of 699.604.073 Dinar (Six hundred ninety nine thousand six hundred four dinar and thirty seven fils) as salaries for February 2014 for those attributed to the ministry.”

These documents states that “the number of accrued persons is 499 one”. All of the names are enclosed within the letter.

This number does not include all the Jordanian security members found in Bahrain, but only those who have been recently recruited.

Another letter holding the same date and the number “A-M-4-6” notices that the dues transferring is conducted through the “National Bank of Bahrain” to the “Arab Jordan Bank” which opened bank accounts to all the Jordanian policemen within “Special arrangements regarding this issue”, as stated in the letter.

Before considering that “the Jordanian policemen existence had nothing to do with the Bahraini crisis”, the Minister of State for Information Affairs, Sameera Rajab, affirmed during a lecture in Jordan on Tuesday that the Jordanian policemen are found in Bahrain pursuant to a security agreement. Ms. Rajab also underlined that “arrangement and security cooperation with an Arab state is better than that with a foreign one”. …source