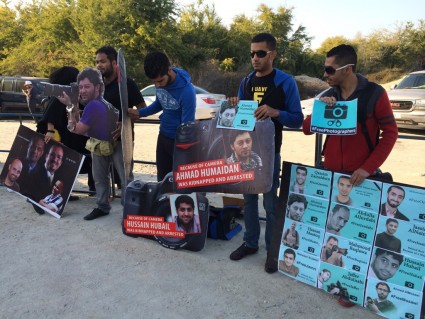 – Attached some pictures from Friday(21 Feb 14) Solidarity event with
their detained journalist colleagues.

– Today Sayed Ahmed Al Mousawi family visited him, and his father told
me that: He is not in a good shape, he is pale and broken.

He said that during the torture they asked him: who do you work for?
who do you shoot for? is it AlWefaq? Where do you publish your
pictures? who pays you for them?

The other thing that he was accused of is: that he is providing
phone Sim cards to the protesters/ terrorists as he works in a telecom
company (VIVA).

His family is concerned about his health situation, and about him in
general specially that he was denied access to his lawyer.

Tell you M.P.s and Congressmen to act and give coverage.