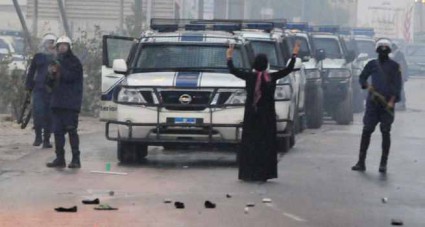 MANAMA, Bahrain (AP) — Bahraini activist Zainab al-Khawaja was released from prison on Sunday after nearly a year behind bars for multiple convictions including participation in an illegal gathering.

Friends and supporters greeted her in a coffee shop in a main mall hours after her release. The cafe has served as a gathering point for activists since the small island-nation’s Arab Spring-inspired uprising.

“One year of prison is nothing,” she told journalists defiantly after her release. “We have a cause… This will not stop us.”

Bahrain’s majority Shiites have led a three-year uprising seeking a greater political voice in the Sunni-ruled Gulf kingdom, which is home to the US Navy’s 5th Fleet.

Al-Khawaja, who is popular online and on Twitter, said international attention should focus on an estimated 3,000 prisoners believed to be behind bars in Bahrain on politically related charges.

Her father is prominent human rights activist Abdulhadi al-Khawaja, who is among several opposition figures who are serving life sentences. He drew attention to his imprisonment with a lengthy hunger strike in 2012.

Her lawyer Mohammed al-Wasti said she still faces two trials, one this month and one next month, on charges that include damaging police property, defacing a picture of Bahrain’s king and insulting a police officer. …source 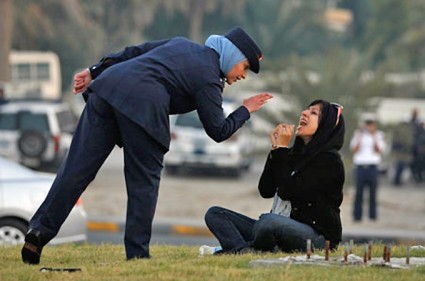 Bahraini activist Zainab Al-Khawaja was sentenced to a further four months in prison by a Criminal Court in relation to two new cases brought against her for “destroying government property”.

On 27 January Zainab Al-Khawaja, dual Bahraini and Danish national, was sentenced by the Lower Criminal Court in Manama, the capital, to a further four months’ imprisonment on charge of “destroying government property”. After neither she nor her lawyer attended trial, Zainab Al-Khawaja was sentenced namely for ripping pictures of the King belonging to the Ministry of Interior, on 4 and 6 May 2012. The trial of another case against her is also due to begin on 5 February. She is charged with “insulting a police officer” because she verbally defended another prisoner who was insulted and humiliated by a prison guard on 22 June 2013 in ‘Issa Town detention centre for women, south of Manama, where both women are held.

Since 27 February 2013 Zainab Al-Khawaja has been serving several short prison sentences in five other cases and was due to be released on 20 February 2014. The sentences issued against her by lower criminal courts are final because she refused to appeal before higher courts believing that Bahrain’s judiciary is controlled by the government. She has also refused to pay bail for her release. Zainab Al-Khawaja has been boycotting court hearings and refusing to appear before the Public Prosecution. However, on 27 January she was informed of the court session half an hour before it was due to take place and she informed her lawyer shortly afterward but he was unable to attend. …more