On Formula 1 race day, a teacher’s letter from inside Bahrain’s Jau Prison 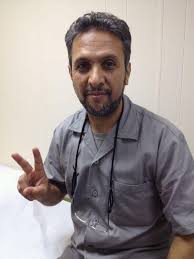 As the focus of international media falls on Bahrain for the Grand Prix, it should not ignore the government’s continuing crackdown on civil society.

JAU, Bahrain — The opening day of the prestigious Formula 1 race in Bahrain — April 6, 2014 — is an important day for my country: the government gets the chance to show the world a modern, vibrant side of Bahrain. It’s also a landmark day for me, the third anniversary of my arrest for peacefully representing the Bahraini Teacher’s Association (BTA).

I write today from Bahrain’s central prison with the hope that while the focus of international media falls on Bahrain for the Grand Prix, it does not ignore the continuing crackdown on civil society.

In early 2011, like in other Middle East countries, people in Bahrain demonstrated peacefully for political reform against generations of dictatorship. We are ruled by a family where the king’s uncle has been the country’s unelected prime minister for over 40 years.

On this day three years ago I was arrested and then tortured for protesting against the government’s violent response to peaceful demonstrators who gathered at the Pearl Roundabout in February and March 2011.

The police raided my home which I had fled, ransacked our property, and terrified my wife and daughters. Hundreds of others were arrested around that time including my colleague and vice-president of the BTA, Jalila al Salman, taken by police on March 29 after her home was raided in the middle of the night.

On April 6 they finally found me and I was taken into police custody. I was beaten, forced to stand long periods of time, verbally abused and tortured. I was hung from the ceiling, hit with a plastic hose and prevented from speaking with my family for weeks.

Immediately after my arrest, the Bahraini Teacher’s Association was dissolved by the Bahraini government for encouraging a school strike. In September 2011, I was sentenced to 10 years imprisonment after an unfair trial in a military court on charges including “inciting hatred amongst the regime,” “calling for teachers to strike” and “participating in calling for illegal gatherings.”

Jalila al Salman, along with other labor leaders, medics and human rights activists was also tortured and sent to prison. The United States government sent observers to my trial and other trials, but never spoke out publicly about the unfair proceedings, even as human rights organizations such as Human Rights First urged the Obama administration to say something.

In October 2012 my sentence was reduced to five years, which I continue to serve at Bahrain’s Jau Prison — notorious for its overcrowding and poor treatment of prisoners. I am imprisoned along with several of Bahrain’s most prominent human rights defenders — leading, peaceful figures in Bahrain civil society. …more