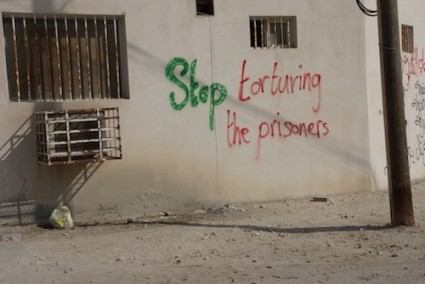 Bahrain’s main opposition party has called on human rights organizations to take immediate action on Bahraini political prisoners who are on hunger strike.

Al-Wefaq National Islamic Society urged the UN High Commissioner for Human Rights as well as the Red Cross to look into the situation in the Dry Dock prison, located on the island of Muharraq, Al-Alam reported.

Around 500 prisoners are on hunger strike in the notorious prison in protest against the mistreatment of inmates.

The prisoners say they are subjected to torture during interrogation.

At least 3,000 detainees including women and children are being reportedly held in the Dry Dock prison.

A delegation of the High Commissioner for Human Rights of the United Nations started a two-month visit to Bahrain in order to meet the different Bahraini factions and the civil society institutions as well as the government before it reports all its findings.

The Bahraini Observatory for Human Rights met the international delegation and called on a permanent existence for the Commissioner in Bahrain, what would help in protecting the human rights in Bahrain.

Bahrain’s human rights record has come under scrutiny over its handling of anti-regime protests that erupted across the country in early 2011.

Since mid-February 2011, thousands of pro-democracy protesters have held numerous demonstrations in the streets of Bahraini cities and villages, calling for the Al Khalifa royal family to relinquish power.

On March 14, 2011, troops from Saudi Arabia and the United Arab Emirates invaded the country to assist the U.S.-backed Bahraini government in its crackdown on peaceful protesters. …more