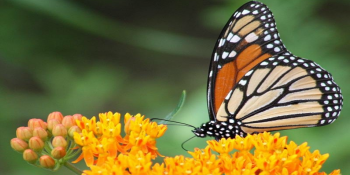 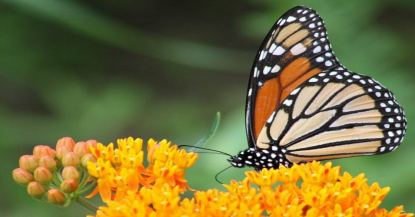 ‘The alarming decline of monarchs is driven in large part’ by Roundup Ready crops, Center for Food Safety finds’

Herbicide-resistant genetically modified crops have brought the iconic monarch butterfly to the brink of extinction, according to a new report presented by the Center for Food Safety to Congress on Thursday.

The report, Monarchs in Peril (pdf), is the most comprehensive look yet at how Monsanto’s ‘Roundup Ready’ crops have helped decimate the monarch population, which has declined by 90 percent in the past 20 years.

“This report is a wake-up call. This iconic species is on the verge of extinction because of Monsanto’s Roundup Ready crop system,” said Andrew Kimbrell, executive director at Center for Food Safety. “To let the monarch butterfly die out in order to allow Monsanto to sell its signature herbicide for a few more years is simply shameful.”

As Common Dreams has reported before, and the new study makes abundantly clear, a critical factor in the orange-and-white butterflies’ decline is the loss of host plants for larvae in their main breeding habitat, the Midwestern Corn Belt. Monarchs lay eggs exclusively on plants in the milkweed family, the only food their larvae will eat.

And the loss of milkweed can be blamed on the proliferation of glyphosate, one of the very few herbicides that kills the perennial plant and a primary ingredient in Monsanto’s Roundup. While glyphosate was little used two decades ago, it has become by far the most heavily used herbicide in the U.S. thanks to glyphosate-resistant Roundup Ready corn and soybean crops. According to the Center for Food Safety, corn and soybean fields in the Corn Belt have lost 99 percent of their milkweed since 1999.

“The alarming decline of monarchs is driven in large part by the massive spraying of glyphosate herbicide on genetically engineered crops, which has virtually eliminated monarch habitat in the corn and soybean fields that dominates the Midwest landscape,” said Bill Freese, Center for Food Safety science policy analyst and co-author of the report. “Glyphosate is the monarch’s enemy number one.”

At the end of 2014, the U.S. Fish and Wildlife Service said Endangered Species Act protection may be warranted for monarch butterflies. The agency is now conducting a one-year status review on monarchs.

While CFS said endangered species protection is “paramount,” the report lists numerous interim and additional policy recommendations, including that the “U.S. Department of Agriculture should reject applications to approve new herbicide-resistant crops, and EPA should deny registration of herbicides for use on them, unless or until appropriate restrictions are enacted to ameliorate their harms to milkweeds, monarchs and pollinators.”