US Militarizes Racism and Neoliberal Violence 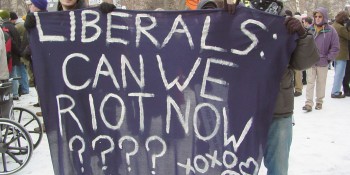 The Militarization of Racism and Neoliberal Violence
18 Aug. 2014 15:43 By Henry A. Giroux, Truthout 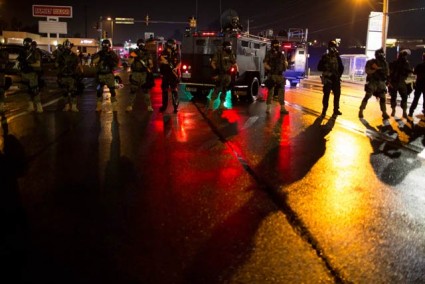 Police form a line during a standoff with protesters in Ferguson, Mo. – Photo: Whitney Curtis – NYT

The recent killing and then demonization of an unarmed 18-year-old African-American youth, Michael Brown, in Ferguson, Missouri by a white police officer has made visible how a kind of military metaphysics now dominates American life. The police have been turned into soldiers who view the neighborhoods in which they operate as war zones. Outfitted with full riot gear, submachine guns, armored vehicles, and other lethal weapons imported from the battlefields of Iraq and Afghanistan, their mission is to assume battle-ready behavior. Is it any wonder that violence rather than painstaking, neighborhood police work and community outreach and engagement becomes the norm for dealing with alleged “criminals,” especially at a time when more and more behaviors are being criminalized?

But I want to introduce a caveat. I think it is a mistake to simply focus on the militarization of the police and their racist actions in addressing the killing of Michael Brown. What we are witnessing in this brutal killing and mobilization of state violence is symptomatic of the neoliberal, racist, punishing state emerging all over the world, with its encroaching machinery of social death. The neoliberal killing machine is on the march globally. The spectacle of neoliberal misery istoo great to deny any more and the only mode of control left by corporate-controlled societies is violence, but a violence that is waged against the most disposable such as immigrant children, protesting youth, the unemployed, the new precariat and black youth.

Neoliberal states can no longer justify and legitimate their exercise of ruthless power and its effects under casino capitalism. Given the fact that corporate power now floats above and beyond national boundaries, the financial elite can dispense with political concessions in order to pursue their toxic agendas. Moreover, as Slavoj Žižek argues “worldwide capitalismcan no longer sustain or tolerate . . . global equality. It is just too much.” (1) Moreover, in the face of massive inequality, increasing poverty, the rise of the punishing state, and the attack on all public spheres, neoliberalism can no longer pass itself off as synonymous with democracy. The capitalist elite, whether they are hedge fund managers, the new billionaires from Silicon Valley, or the heads of banks and corporations, is no longer interested in ideology as their chief mode of legitimation. Force is now the arbiter of their power and ability to maintain control over the commanding institutions of American society. Finally, I think it is fair to say that they are too arrogant and indifferent to how the public feels.

Neoliberal capitalism has nothing to do with democracy and this has become more and more evident among people, especially youth all over the globe. As Žižek has observed, “the link between democracy and capitalism has been broken.” (2) Theimportant question of justice has been subordinated to the violence of unreason, to a market logic that divorces itself from social costs, and a ruling elite that has an allegiance to nothing but profit and will do anything to protect their interests. This is why I think it is dreadfully wrong to just talk about the militarization of local police forces without recognizing that the metaphor of “war zone” is apt for a global politics in which the social state and public spheres have been replaced by the machinery of finance, the militarization of entire societies not just the police, and the widespread use of punishment that extends from the prison to the schools to the streets. Some have rightly argued that these tactics have been going on in the black community for a long time and are not new. Police violence certainly has been going on for some time, but what is new is that the intensity of violence and the level of military-style machinery of death being employed is much more sophisticated and deadly. For instance, as Kevin Zeese and Margaret Flowers point out, the militarization of the police in the United States is a recent phenomenon that dates back to 1971. They write:

The militarization of police is a more recent phenomenon [and marks] the rapid rise of Police Paramilitary Units (PPUs, informally SWAT teams) which are modeled after special operations teams in the military. PPUs did not exist anywhere until 1971when Los Angeles under the leadership of the infamous police chief Daryl Gates, formed the first one and used it for demolishing homes with tanks equipped with battering rams. By 2000, there were 30,000 police SWAT teams [and] by the late 1990s, 89% of police departments in cities of over 50,000 had PPUs, almost double the mid-80s figure; and in smaller towns of between 25,000 and 50,000 by 2007, 80% had a PPU quadrupling from 20% in the mid-80s. [Moreover,] SWAT teams were active with 45,000 deployments in 2007 compared to 3,000 in the early 80s. The most common use . . . was for serving drug search warrants where they were used 80% of the time, but they were also increasingly used for patrolling neighborhoods. (3)

At the same time, the impact of the rapid militarization of local police forces on poor black communities is nothing short of terrifying and symptomatic of the violence that takes place in advanced genocidal states. For instance, according to a recent report entitled “Operation Ghetto Storm,” produced by the Malcolm X Grassroots Movement, “police officers, security guards, or self-appointed vigilantes extra judicially killed at least 313 African-Americans in 2012. . . . This means a black person was killed by a security officer every 28 hours. The report suggests that “the real number could be much higher.” (4) …more 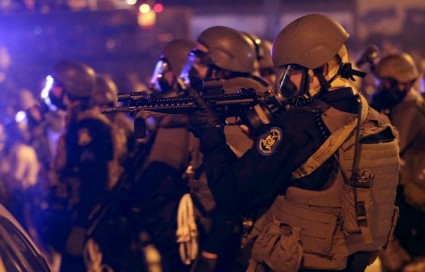 Police advance after tear gas was used to disperse a crowd of protesters in Ferguson, MO on Sunday – AP Photo/Charlie Riedel

The ongoing unrest in Ferguson over 18-year-old Mike Brown’s shooting has illustrated the increasingly blurry line between law enforcement and military combat, as heavily armed police forces in riot gear have repeatedly clashed with unarmed protesters. On Sunday night, that tension was on full display, and police reportedly fired tear gas and rubber bullets into the crowds well before the town’s midnight curfew.

U.S. police are increasingly relying on those so-called “non lethal weapons” for crowd control, a dynamic that’s inspired a national conversation about whether it’s appropriate to arm cops with weapons that are typically used in combat. Indeed, there’s increasing evidence that non lethal weapons can actually inflict serious pain and, in some rare cases, even kill people. Here’s how the police in Ferguson are potentially putting protesters’ health in danger: 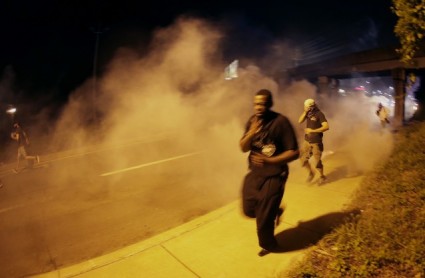 Although tear gas is a chemical agent that’s banned in warfare, it’s perhaps the most common method of crowd control at protests around the world. Tear gas activates pain receptors in the body, causing a sensation of burning in subjects’ eyes, noses, and throats. In response to the pain, victims typically cough and choke, and their bodies produce excessive tears and mucous in an attempt to flush out the chemical. Because there are so many pain receptors in the cornea, it’s usually impossible for them to keep their eyes open, and some people report temporary blindness. People who suffer from asthma, or people who have been sprayed with tear gas in an enclosed space, often struggle to breathe.

Although tear gas is classified as non lethal because it’s generally considered to have only short term consequences, some scientists warn that things can quickly go wrong if it’s deployed incorrectly. There have been several reports of people dying in Egypt and Israel after inhaling too much tear gas.

Opponents of this particular chemical agent point out that there hasn’t been enough conclusive research into its potential long term health effects. Physicians for Human Rights has documented several cases in which people in Bahrain have suffered miscarriages, respiratory failure, and persistent blindness after being exposed to tear gas. The Chilean government suspended the use of tear gas in 2011 over concerns that the chemicals could damage women’s reproductive systems and harm their fetuses.

“These agents are certainly not benign,” Sven-Eric Jordt, a professor of pharmacology at Yale University School of Medicine, told the National Geographic in an interview last year. “There is no way to disconnect the pain that is induced from the physiological inflammatory effects of these agents.” …more