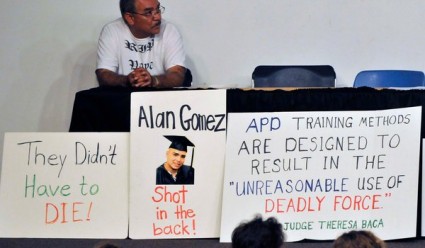 ALBUQUERQUE — Mike Gomez has been angry with the police officer here who shot and killed his 22-year-old son, Alan, last year, after officers responded to a report that the young man was acting erratically and firing a rifle. But Mr. Gomez became even angrier just days ago after he learned that the officer, Sean Wallace, received a $500 payment from the Albuquerque police union shortly after the shooting.

The payment, union officials said, was made to help Officer Wallace cope with the stress of the shooting. But Mr. Gomez said he believed the money served a more ruthless purpose: as a bounty-style reward for a shooting.

“You’re telling police that if you shoot somebody you’re going to get paid leave and you’re going to get $500,” said Mr. Gomez, whose son was unarmed when he was shot last May. “If the police shoot a person they get this. What does the family get? A funeral bill.”

The controversy surrounding the payments has shed light on a little-known practice that police unions in at least a few other cities, including Phoenix, have engaged in for years.

Advocates and others here have protested the Police Department’s 23 shootings by officers since 2010 — 18 of them fatal — with some people calling for the police chief’s resignation and for a Justice Department investigation.

The police union payments were reported on Friday by The Albuquerque Journal. Twenty Albuquerque officers involved in shootings in 2010 and 2011 were paid by the union, with 16 receiving $500, two $300, one $800 and another $1,000, the newspaper reported, citing internal union financial documents. Many of the officers who received the money were involved in the 15 fatal shootings in Albuquerque during that time.

Executives of the union, the Albuquerque Police Officers’ Association, said the payments had been given to officers after the shootings and that the practice had gone on for at least two decades. They said the payments of up to $500 were to cover the costs of out-of-town trips for officers and their families after stressful episodes, and that any payment to an officer beyond $500 was for other union-related matters. The executives denied that the money was intended to reward officers who fired their weapons. …more