Zapatistas: the wealth of dignity 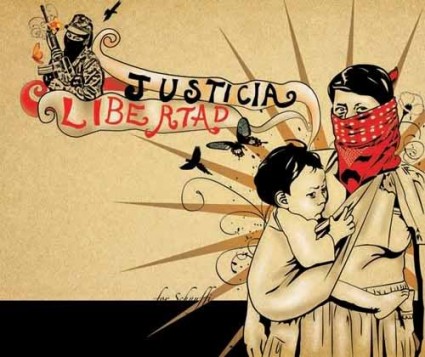 Zapatistas: the wealth of dignity
December 2013

On the 20th anniversary of the Zapatista uprising of 1st January 1994 we publish this article by Luis Hernández Navarro which illustrates the achievements of Zapatista autonomy. Thanks to Dorset Chiapas Solidarity.

In the community of Emiliano Zapata in the caracol Whirlwind of Our Words, 30 Zapatista families work collectively. They have in common a coffee plantation, vegetable gardens and about 350 head of cattle. Its inhabitants do not receive government support of any kind, but their standard of living is much better than that of the surrounding PRI-governed settlements.

In the community there is a small cooperative shop whose proceeds go to works that people need. There, as in all the other rebel regions, the cooperative’s resources are used to finance public works such as schools, hospitals, clinics, libraries or water pipes.

Throughout all the rebel territory, an autonomous system of well-being flourishes, based on a de facto land reform which prioritises the communal use of the lands and natural resources in collective work, as well as in the production of items for use, and fair trade practices in the international market.

In areas of Zapatista influence, they have been overthrowing the law of San Garabato [greed], which dictates that farmers must buy the goods they need at high prices and sell their products cheaply. It happens frequently that coyotes (abusive commercial intermediaries) find themselves forced to pay the rebel support bases higher prices for their crops, livestock and crafts than those offered to the residents who are not organised. The Zapatista cooperatives have acquired a veritable swarm of motor vehicles for moving and transporting their products.

In the rebel communities, an environmental awareness has also been developed. There agroecology is practiced and the use of chemical fertilizers has been banished. Work is done to protect the soil. There is a genuine and widespread concern for conserving forests and jungles.

As the authors of the book “Very Other Struggles (Luchas muy Otras): Zapatismo and Autonomy in the Indigenous Communities of Chiapas”, say: “the challenges of sustainability in community production highlight the tension between the need to survive within the existing socioeconomic scheme and the project to transform that scheme.” What emerges here is, rather than a Zapatista economic model, “an endogenous and diverse process of prioritising the communities as an alternative to submitting to the steamroller logic of transnational capital.”

In the 27 Zapatista municipalities, alcohol is not drunk and drugs are not grown. Justice is exercised without government intervention. Rather than punishment, the focus is put on the rehabilitation of the offender. Women have taken positions and responsibilities which they undertake infrequently in rural communities.

The network of common infrastructure in education, health, agro-ecology, justice and self-government, which the insurgents have built outside State institutions, functions according to its own logic, which is plural and diverse. The Zapatista communities have trained hundreds of education and health promoters and agricultural technicians, in accordance with their own culture and identity.

All this has been achieved because the Zapatistas govern themselves and defend themselves. They have constructed their autonomy without asking permission, in the midst of an ongoing counterinsurgency campaign. They resist continual harassment from 51 military bases and from welfare programmes which seek to divide the communities in resistance by offering them crumbs.

However, towards the end of this year a smear campaign was unleashed which asserts that none of this is true. Falsely, it claims that the Zapatistas are worse off today than they were 20 years ago, that they are destroying the environment and dividing communities. This is the latest episode in a dirty war as old as the uprising itself.

The slanders do not hold up. Hundreds of public testimonies demonstrate that the accusations against the rebels have nothing to do with the reality that the slanderers spread. For example, the painter Antonio Ortiz, Gritón, was in the community of Emiliano Zapata between 11th and 16th August this year, as part of the Zapatista escuelita, and documented his experience in a moving account that he put on Facebook. He was surprised to find that 30 indigenous families owned 350 head of cattle. He was part of a group of 1,700 people who attended the first Zapatista escuelita that month. …more

Solidarity with Zapatistas under attack

Solidarity with Zapatistas under attack
February 2014

In our corner of the world in the United Kingdom we learned with outrage of the recent attacks on the Zapatista support bases (BAZ) of the community of 10 de Abril, autonomous municipality 17 de Noviembre, in the Caracol of Morelia, and on staff from the hospital of San Carlos in Altamirano who came to the assistance of those who had been injured during this attack.

We raise our voices to strongly condemn these repressive actions which are without doubt part of the ongoing counterinsurgency war being waged by the three levels of the bad government in Mexico against the dignified autonomy of the BAZ, who struggle every day for another world, one with democracy, freedom and justice.

The JBG Heart of the Rainbow of Hope has denounced that on the 30th January, 300 members of CIOAC democratic, from the nearby community of 20 de Noviembre, arrived in 18 pickup trucks and attacked the BAZ of 10 de Abril with sticks and stones. During this attack, three Zapatistas were seriously wounded, while two others on each side received minor injuries. A call for assistance was made to the hospital of San Carlos in Altimirano, but when an ambulance and a pickup truck arrived, the hospital staff, including two nuns, were cruelly assaulted by supporters of CIOAC, and prevented from attending to the injured, contrary to the Geneva Convention.

With the support and encouragement of the bad government these people have been trying since 2007 to seize the lands of the community of 10 de Abril, which were recuperated by the Zapatistas in 1994, and which have been worked by them ever since. These attacks have been worsening since last November. The Fray Bartolomé de las Casas Human Rights Centre warns us that “in the region there is an imminent possibility of new attacks and an intensification of the violence, which would be a risk to life and personal integrity, in addition to the violations of the right to territory and autonomy of the Zapatista peoples.” We therefore link our voices to the demands that the authorities of the federal, state and municipal governments:

· act to reduce tension in the conflict and to guarantee the security and integrity of those involved, given their responsibility to guarantee, respect and protect the human rights of the population that is located within their jurisdiction

· investigate and punish those responsible for the attacks. …more