Ukraine is About Oil. So Was World War I 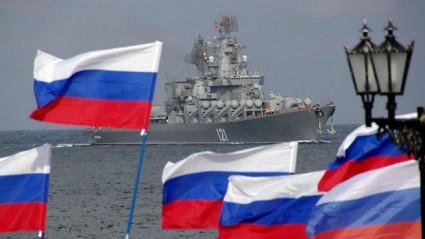 Ukraine is About Oil. So Was World War I
by Robert Freeman – 8 March, 2014 – common dreams

Pro-Russian supporters wave Russian flags to welcome the Russian Black Sea Fleet flagship, the missile cruiser Moskva, entering Sevastopol bay in September 10, 2008. (Photo: AFP)Ukraine is a lot more portentous than it appears. It is fundamentally about the play for Persian Gulf oil. So was World War I. The danger lies in the chance of runaway escalation, just like World War I.

The oil is running out. God isn’t making any more dinosaurs and melting them into the earth’s crust. Instead, as developing world countries aspire to first-world living standards, the draw-down on the world’s finite supply of oil is accelerating. The rate at which known reserves are being depleted is four times that at which new oil is being discovered. That’s why oil cost $26 a barrel in 2001, but $105 today. It’s supply and demand.

Oil recalls that old expression: “In the land of the blind, the one-eyed man is king.” In industrial civilization, the nation that controls the oil is king. And 60% of the known oil reserves are in the Persian Gulf. That’s why the U.S. invaded Iraq in 2003: to seize control of the oil. Alan Greenspan told at least one truth in his life: “I hate to have to admit what everybody knows. Iraq is about oil.”

But the U.S. lost the war in Iraq. Remember? The U.S. was going to install a democracy and 14 permanent bases there. They’re not there. The U.S. was run out after proving unable to pacify the Islamic jihad it had unleashed under the pretext of searching for non-existent weapons of mass destruction. Instead, Iraq allied itself with Iran, its Shi’ite comrade-in-arms in the Muslim Wars of Religion.

So today, the battle for the Persian Gulf is being carried out through its two regional powers, Saudi Arabia, the champion of Sunni Islam, and Iran, the torch carrier for Shi’ite Islam. Think of the Wars between the Protestants and Catholics in the 1500s. The U.S. backs Saudi Arabia, as it has done since 1945, when Roosevelt cut a deal with Ibn Saud to protect his illegitimate throne in exchange for the House of Saud only selling oil in dollars.

Iran, of course, is implacably hostile to the U.S. after the U.S. overthrew Iran’s democratically elected president, Mosaddegh, in 1953 and installed its own fascist puppet, the Shah of Iran. The Iranians overthrew the Shah in 1979 and installed a fundamentalist theocracy that continues to this day.

Iran’s main ally in the region is Syria, which the U.S. has been trying to overthrow for three years by helping the al-Qaeda-linked rebels that are attacking Syria. Syria’s chief military patron is Russia, which conveniently bailed Obama out of his childish “red line” declaration last year, a declaration he had neither the military nor political nor diplomatic capacity to carry out. …more

« Brainwashed, the indoctrinated West (Previous News)
(Next News) US hypocrisy over ‘Russian aggression’ in Ukraine »