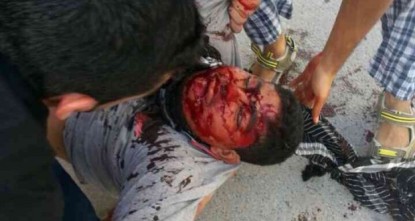 Bahrain’s claims of investigations into police human rights abuses are yet again smashed as a picture of a boy’s face, which was covered in blood, emerged last Friday.

Just days after the Interior Ministry’s announcement to open an investigation into a police shooting at a protester, security police opened fire again on protesters calling for the release of opposition leader Sheikh Ali Salman in Duraz, west of the capital Manama. This time, the victim was 13 year old Mohammed who sustained severe wounds from buckshot in the face. Mohammed’s condition is worrying and he is still under medical observation to save his life.

Such crimes can only indicate that the security forces are following a systematic approach to target the safety and lives of the protesters.

Many teenagers and children were killed by security forces on streets, however, the injustice system in Bahrain has failed to bring perpetrators to justice. …source