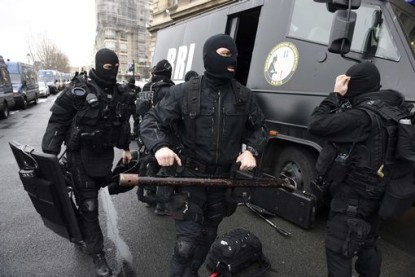 Putin did it. Sorry, he didn’t. In the end, it was not Russia “aggression” that attacked the heart of Europe. It was a pro-style jihadi commando. Cui bono?

Careful planning and preparation; Kalashnikovs; rocket-propelled grenade launcher; balaclavas; sand-colored ammunition vest stuffed with spare magazines; army boots; piece of cake escape in a black Citroen. And the icing on the lethal cake; faultless Paris-based logistical support to pull that off. A former top French military commander, Frederic Gallois, has stressed the perfect application of “urban guerrilla technique” (where are those notorious Western counter-terrorism “experts” when one needs them?)

They might have spoken perfect French; others said it was broken French. Anyway, what matters is that they uttered the magic word; “We’re al-Qaeda.” Better yet; they told a man in the street, “Tell the media that this is al-Qaeda in Yemen”, which means, in American terror terminology, al-Qaeda in the Arab Peninsula (AQAP), which had Charlie Hebdo’s editor/cartoonist Stephane Charbonnier (“Charb”) on a hit list duly promoted by AQAP’s glossy magazine Inspire. Accusation: “Insulting the Prophet Mohammed.”

And just to make sure everyone had the perpetrators implanted on their brain, the killers also said, “Allahu Akbar”; “We have killed Charlie Hebdo”; and “We have avenged the Prophet.”

Case closed? Well, it took only a few hours for French police to identify the (usual?) suspects; French-Algerian brothers Said and Cherif Kouachi. The third man – the driver of the black Citroen, 18-year-old Hamyd Mourad – then turned himself in with an ironclad alibi. So the third man remains a cipher.

They all wore balaclavas. The Kouachi brothers have not been captured. But the police seem to know very well who they are. Because they found an abandoned ID in the black Citroen (oh, the troubles of being a command in a rush …) How come they didn’t know anything before the carnage?

Right on cue, Cherif Kouachi’s bio was splattered all over. He was on a global watch list. Along with six others, he was sentenced in May 2008 to 3 years in prison for “terrorism”; in fact unloading a dozen young Frenchmen via madrassas in Egypt and Syria to none other than Abu Musab al-Zarqawi, the killed-by-an-American-missile former head of Al-Qaeda in Iraq and the spiritual father of Daesh/ISIS/ISIL.

Also right on clue, a full narrative was ready for mass consumption. The key point; French police privileges the hypothesis of “Islamic terrorism”. According to their “experts”, this could be an attack “ordered from abroad and executed by jihadis coming back from Syria that have escaped us”, or it could be “suburban idiots that radicalized themselves and concocted this military attack in the name of al-Qaeda.”

Scrap option two, please; this was a pro job. And staying with option one, this points right at – what else – blowback. Yes, they could be Daesh/ISIS/ISIL mercenaries trained by NATO (crucially, France included) in Turkey and/or Jordan. But it might get even false-flag nastier. They could also be former or current French special forces.

Predictably, Islamofascism peddlers are already having a field day/week/month/year. For simpletons/trolls/hordes exhibiting an IQ worthy of sub-zoology, when in doubt, demonize Islam. It’s so convenient to forget that untold millions from Pakistan’s tribal areas to street markets across Iraq continue to feel pain devastating their hearts and lives as they are expendable victims of the jihadi mindset – or “Kalashnikov culture”, as it is known in Pakistan – profiting the “West”, directly or indirectly, for decades now. Think ritual droning of Pakistani, Yemeni, Syrian, Iraqi or Libyan civilians. Think Sadr City witnessing carnages over 10 times worse than Paris.

What French President Francois Hollande defined as “an act of exceptional barbarism” – and it is – does not apply when the “West”, France in the front line, from King Sarko to General Hollande himself, weaponizes, trains and remote-controls assorted mercenaries/beheaders from Libya to Syria. Oh yeah; killing civilians in Tripoli or Aleppo is perfectly all right. But don’t do that in Paris.

So this, in the heart of Europe, is what blowback feels like. This is what people feel in the Waziristans when a wedding party is incinerated by a Hellfire missile. In parallel, it’s absolutely impossible that the oh so sophisticated Western intel network had not seen blowback coming – and was impotent to prevent it (how come the scapegoats du jour, the Kouachi brothers, were not in the gallows?) …more